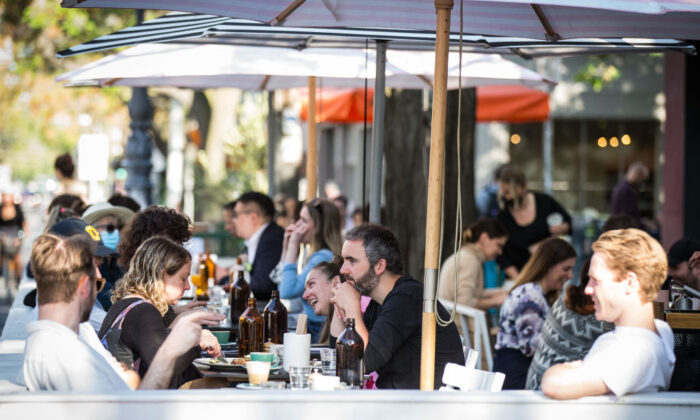 Health Minister Martin Foley is expected to sign new pandemic orders to that effect on Dec. 15 under the new Public Health and Wellbeing Act, which will come into effect at 11.59 p.m. and continue until Jan. 12.

Children under 18 will also no longer be required to show proof of their vaccination status at venues, including hospitality.

However, some mandatory requirements will remain for patrons of hair and beauty salons, restaurants, bars, and cafes to be vaccinated as a condition of entry.

The vaccination rate in Victoria was 91.8 percent as at Dec. 13 (pdf), with the state currently managing 365 hospital patients with COVID-19, the disease caused by the CCP (Chinese Communist Party) virus.

About 3.3 percent of the over 10,700 confirmed cases are being treated in hospital, with around 84 cases being managed in intensive care.

It is Victoria’s highest number of hospitalisations since Nov. 16, when 394 people were in hospital.

The seven-day hospitalisation average is also on the rise, growing to 335.

An Omicron case was confirmed to have attended Sircuit Bar in Fitzroy between 9 p.m. and midnight on Dec. 10 and then Collingwood’s Peel Hotel between 11.30 p.m. and 3 a.m.

It is estimated about 410 people were at Sircuit and another 320 were at the Peel Hotel at those times.

All have been deemed close contacts and must get a PCR test immediately and isolate at home for seven days if fully vaccinated, or 14 if not.

Patrons who entered Sircuit from 6 p.m. to 9 p.m. are also being contacted and asked to self-identify if they were there beyond 9 p.m., with authorities strongly advising them to get tested and isolate until they receive a negative result.

“We’re still learning more about this variant, so we’re taking careful steps to ensure the safety and health of everyone in the community,” the health department said on Dec. 15.