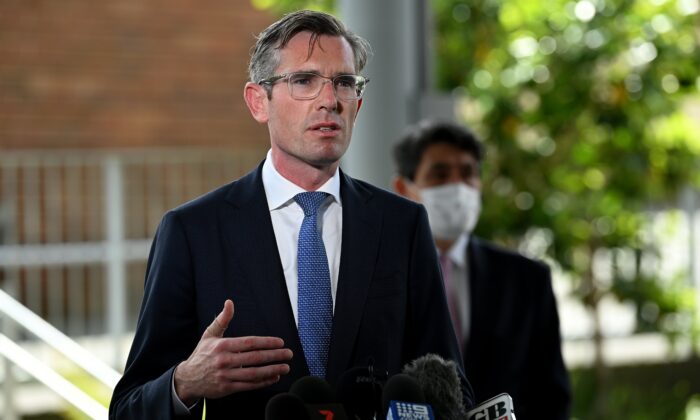 With COVID-19 cases surging across Australia, NSW is being spruiked to Korean scientists as a clinical trial hub where drugs can be developed.

After meeting with executives from car giant Hyundai in Seoul to talk about investments in hydrogen production, NSW Premier Dominic Perrottet shifted his attention to health as part of his 10-day Asia trade trip.

Australia accounts for 4.2 percent of all global clinical trials activity last year, and the premier wants to pitch NSW as the go-to state for clinical research worldwide.

Perrottet visited the Seoul Bio Hub, a health start-up funded by the Seoul metropolitan government, on Tuesday to sell Korean scientists on “NSW as the capital of start-ups”.

“We lead when it comes to med tech (medical technology) and innovation, and there was a strong interest today in our precincts at Westmead, Randwick and Liverpool,” he told reporters before heading to lay a wreath at the War Memorial of Korea.

“There was strong interest, particularly in clinical trials given our large population and our extensive multicultural community.”

But his investment-focused trip has been hounded by the mounting political controversy of former deputy premier John Barilaro being appointed to a lucrative $500,000 New York-based trade commissioner role after it was offered to another candidate Jenny West.

On Tuesday, government documents provided to a parliamentary inquiry revealed Perrottet, as then-treasurer received a ministerial briefing on the chosen candidate last year.

The documents also indicate that then-investment minister Stuart Ayres was also informed by Investment NSW in August that Ms West was the preferred candidate recommended by an independent recruitment panel.

Ayres, who opened a trade commissioner’s office in Singapore on Monday, will join the premier in India on the last leg of his Asia tour later this week.

The briefing note urged “the selection of Ms Jenny West as the successful candidate for the Senior Trade & Investment Commissioners Americas role”.

West previously told the inquiry she was verbally offered the role and subsequently lost her senior job at Investment NSW after it was withdrawn.

It eventually went to Barilaro, who last month relinquished the job, saying it had become untenable.