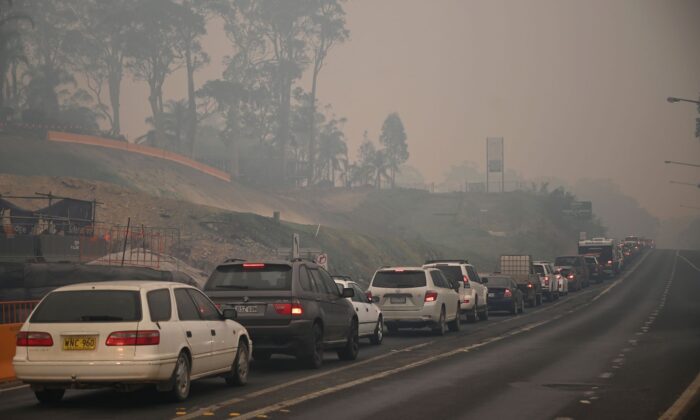 Cars line up to leave the town of Batemans Bay in New South Wales to head north on Jan. 2, 2020 amid a mass evacuation due to bushfires. (Peter Parks/AFP via Getty Images)
Australia

Australia’s most populous state of New South Wales has declared a third state of emergency of the bushfire season ahead of re-elevated fire risk over the weekend.

Premier Gladys Berejiklian said the declaration would come into effect from Friday morning, with severe to extreme conditions forecast for Saturday.

“All our personnel, all our agencies know that from tomorrow they will be subject to forced evacuations, road closures, road openings and anything else we need to do as a state to keep our residents and to keep property safe. We don’t take these decisions lightly,” Berejiklian told reporters on Thursday.

But Prime Minister Scott Morrison has implored those travelling north from the embattled region and the Snowy Valleys—where “tourist leave zones” have been established—to remain patient and cooperative.

He also said the NSW government had not yet asked the Australian Defence Force for additional resources for evacuations, such as those taking place in similarly fire-scorched eastern Victoria.

NSW Rural Fire Service Commissioner Shane Fitzsimmons said Saturday’s conditions would be at least as bad as those on New Year’s Eve, which left a trail of ruined homes, businesses and utility lines.

He confirmed on Thursday the number of houses lost on New Year’s Eve had climbed to 382 and could jump much higher as assessments are made.

Since the start of July, at least 15 people have died and almost 1300 homes have been destroyed by bushfires in NSW. More than 3.6 million hectares—three times the size of Sydney’s metro area—have been burnt.

Morrison on Thursday said he remained in constant contact with Berejiklian and Victorian counterpart Daniel Andrews but any additional ADF deployment needed to be coordinated.

But NSW had not yet requested ADF support for evacuations, such as those taking place in Mallacoota across the Victorian border. Morrison said naval assets were ready to provide support in NSW.

“It is activated at the request of the state agencies. What you cannot have in these situations is governments stepping over the top of each other in responding to a natural disaster,” he said.

With the Princes Highway north of Batemans Bay opening and closing throughout the day, Morrison called on travellers to keep cool as they waited in long lines for petrol, water and groceries.

He broke down on ABC TV on Thursday morning outlining the devastation.

On Wednesday, police found three bodies in the fire-gutted communities of Sussex Inlet and Yatte Yattah. Seven people have died since Monday, including a person found outside a home near Cobargo.

Soot-covered Coolagolite farmer Steve Shipton survived the same fire front but told AAP he thought he “was gone” as he tried to save his family and home.

Thousands of homes across the south coast are also without power after transmission lines were on Tuesday damaged.