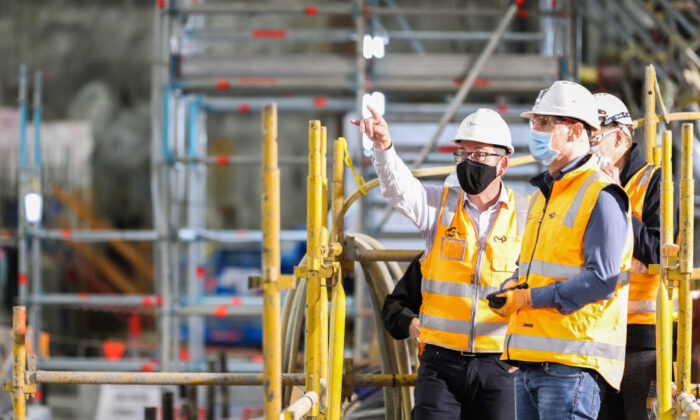 Premier of Victoria Daniel Andrews points as he inspects the underground site of the currently being built, State Library station, as part of the Metro Tunnel metropolitan rail infrastructure project on Nov. 6, 2020 in Melbourne, Australia. (Asanka Ratnayake/Getty Images)
Australia

The federal government has forced the Victorian state government to hand over documents related to a secret deal signed between the state and the Chinese Communist Party (CCP) that involves the state’s infrastructure projects.

This is the third deal between Victoria and the CCP that the federal government is scrutinising under the Foreign Relations Bill that will see arrangements with all foreign nations at each level of government vetoed if they aren’t in Australia’s national interests.

Signed in March 2017—18 months before the Belt and Road Initiative was signed—the memorandum of understanding (MoU) between Victoria and the CCP commits the Australian state to work with Beijing on Victorian infrastructure projects through public-private partnerships (PPPs).

According to Michael Shoebridge, foreign policy expert at the Australian Strategic Policy Institute, public-private partnerships and the Belt and Road Initiative pose a national security risk as the regime plans for a “China-centred global economy.”

“China talks about PPPs as a way of accelerating and broadening the activities you can do to implement the Belt and Road. It’s a faster way of getting projects delivered and a way of obtaining alternative finance to government finance,” Shoebridge told The Age.

“But I think a key thing about the way China thinks about public-private partnerships is that they’re still absolutely guided by the government—so it uses private corporations and corporate capital for government purposes.”

Shoebridge noted that Beijing’s blueprint discussed at its recent annual meeting—especially around technology competition, Hong Kong, and strategic threats posed by Western nations—will shape policies such as the Belt and Road Initiative and public-private partnership.

“The federal government will have to evaluate it based on its merits,” he said. “But I would be surprised if the national security risks around this memorandum of understanding have anything but risen, given the way the Chinese government has operated in the last three years, and with the economic directions outlined in the recent Two Sessions meeting, where the risk of China using economic coercion has grown.”

A Victorian government spokesperson did not provide any details related to the public-private partnerships but instead told The Age that the state government was “continuing to work with the Commonwealth in line with the legislative requirements.”

Moreover, Victorian Premier Daniel Andrews has maintained that deals with China, such as the BRI, pose no threat to national security threat and were always about jobs.

“I’ve always seen these arrangements and all of our arrangements, not just with any one country but with all the different countries, different states, different provinces, different regions that we have relationships with, they’ve always been about a passport to export,” he told reporters in August 2020.

Under BRI, the CCP is reported to significantly undercut foreign companies for infrastructure bids and loan unserviceable amounts to countries that cannot afford the BRI projects, resulting in debt-trap diplomacy.

Prime Minister Scott Morrison has said he saw no benefit to Victoria’s deal with Beijing and signalled that the agreement would be unlikely to stand under the bill.

According to Victoria’s China strategy, Victoria aims to achieve targets across trade, investments, tourism and education with China over 10 years from 2016 to 2026.

“Victoria will work with China to identify economic opportunities that target the intersection of Victoria and China’s respective comparative advantages and development needs—maximising the mutual economic value of our relationship,” the document states.

Both the BRI and the public-private partnership between Victoria and China are among approximately 16 agreements between Australian states and China currently listed on the public register and are set to be scrutinised by the federal government.