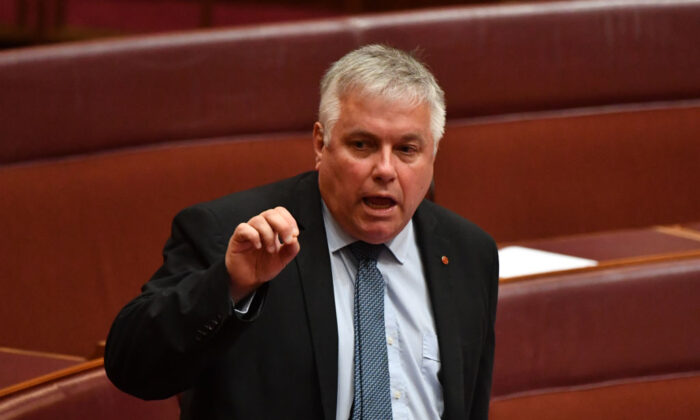 Independent senator for South Australia, Rex Patrick, has called on both the major Coalition and Labor parties to commit to a ban on products made through slave labour.

Patrick said in a release on Saturday that “nobody wants to wear or use misery.”

“Not only is the human cost of slave labour abhorrent, it also leaves Australian businesses competing against imports on unfair terms,” he said.

“I’m calling on both major parties to put on record how they will combat modern slavery if they form government after the election. Implementing my bill as a priority is a good start.”

The senator put forward a bill in 2021 to ban the import of goods produced in whole or part with slave labour, and while the Bill passed in the Senate with the support of the Labor opposition, Greens, and cross benchers, the Coalition (Liberals and Nationals) voted against it.

Patrick said the Coalition have since buried the bill and there’s been no opportunity to debate it in the lower house.

“I am disappointed that the Liberal government failed to support my bill. Whose side are the Liberals on when it comes to combatting modern slavery?” he said.

According to the release, the number of slaves across the world is estimated to be between 38 and 46 million, with the use of forced labour within global production chains a major humanitarian concern.

The issue modern slavery through forced labour has been highlighted in recent years by the well documented human rights abuse of hundreds of thousands of Uyghur people in East Turkestan, or what the Chinese Communist Party (CCP) calls the Xinjiang Autonomous Region in China.

“The massive and systematic oppression of the Uyghur people by the Chinese Government is undeniable,” Senator Patrick said. “The exploitation of detained Uyghurs as a captive labour force is clear.”

According to an Australian Strategic Policy Institute (ASPI) report from from March 2020, “under conditions that strongly suggest forced labour, Uyghurs are working in factories that are in the supply chains of at least 82 well-known global brands in the technology, clothing, and automotive sectors, including Apple, BMW, Gap, Huawei, Nike, Samsung, Sony, and Volkswagen.”

The report estimated that between 2017 and 2019, more than 80,000 Uyghurs were transferred from Xinjiang to factories across China, some of whom were sent directly from detention camps.

Not only Uyghur people, but also Falun Gong practitioners, Tibetans, and Christians, among others, have been subject to forced labour in China.

Senator Patrick said the supply of goods produced in whole or part via slave labour is an immediate and serious problem and must be addressed urgently.

“Given the bipartisan response from the Senate Committee relating to Uyghur forced labour, there should be no hesitation from the next Parliament in passing this bill,” he said.

The Liberal Party did not immediately respond to a request for comment.