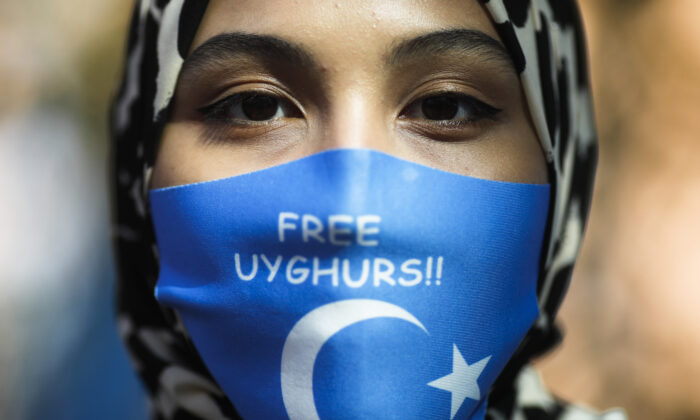 An Australian government inquiry into the use of Uyghur forced labour in China has been told the government’s investigation into the slave labour is crossing “a red line” for the Chinese Communist Party (CCP).

In a submission to the Senate inquiry, analyst Vicky Xu, who was lead author on the Australian Strategic Policy Institute’s 2020 report “Uyghurs for Sale,” said the CCP could not countenance any investigations into human rights or Uyghur rights.

“The Chinese Communist Party considers any form of investigation of the treatment of Uyghurs as crossing a red line, ” Xu said.

Xu’s 2020 report found more than 80,000 people were transferred out of Xinjiang to work in factories across China between 2018 and 2019 and named 83 global brands in the technology, clothing, and vehicle sectors that were linked to forced labour of Uyghurs and other minorities.

Xu said that despite companies attempting to change their production methods or auditor factories in China she said they were met with significant roadblocks from the CCP, and Uyghurs were still forced into slavery.

“Auditors are routinely denied access and greeted by hostile government officials or police officers when they visit Chinese factories,” Xu said. “One key problem remains: Uyghurs are still for sale. Labour agents in China are still advertising tens of thousands of “absolutely obedient” Uyghur workers at a time; factories in coastal cities are still looking specifically for Xinjiang workers.”

The senate inquiry into Uyghur forced labour was spurred by Australian independent senator Rex Patrick’s draft bill that would see Australia ban the import of Xinjiang province goods, as well as goods from any other parts of China produced using forced labour.

It is that last part of the bill that is significant, academic Darren Byler noted, as it will stop not just goods made in Xinjiang province by Uyghurs interred in the labour system but also products from other areas where Uyghurs are often transported during their detention.

Byler, a researcher at the University of Colorado, said in the presentation of his submission that the use of forced labour in China is very widespread around the country.

“The use of forced labour is very widespread,” Byler said. “They go as a batch to work in a factory, and if they refuse, they know they can be sent to a detention camp.”

The Falun Dafa Association in Australia, in their submission, also noted the widespread nature of forced labour issues in China, saying “forced labour abuses are not limited by regional boundaries.”

“There is a substantive case for such a Bill to refer to Uyghurs, Tibetans and Falun Gong practitioners in China. All suffer shocking abuse, endure forced labour and systematic attempts by the Chinese Communist Party to destroy their spiritual and cultural beliefs.

Under communism, human beings have no inherent value. Individuals are expendable, like a commodity to be used for the party-state goals,” President of the Falun Dafa Association of Australia, Lucy Zhao, wrote.

Zhao also recommended the Australian government pass the bill to prevent Australia’s complicity in the use of forced labour products.

“This may not necessarily stop the abuse, but it will send a strong signal to the oppressors and other countries that may be wavering to act, and it will certainly affirm the values we uphold, which will be good for the future of our country and people,” Zhao said.

However, the inquiry also heard from the Australian National University’s Prof. Jane Golley, who, in her submission, downplayed reports about Xinjiang and noted in her testimony she had “anonymously “received information that suggested Uyghur female sterilisation should be regarded as family planning.

Golley, who heads the ANU’s taxpayer-funded Australian Centre on China in the World, faced criticism for her remarks from both Byler and the Committee head, Liberal Senator Eric Abetz.

Byler said that Golley’s advocacy was a perfect example of China’s “seeding of doubt or disinformation’ via western academics.

“It now sheds a light onto other criticisms of other people who have sought to highlight human rights abuses in China,” Abetz said.