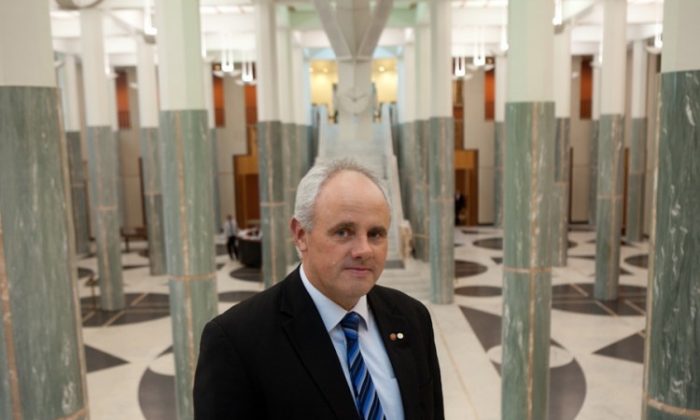 Senator John Madigan moved a motion before the Australian Senate to urge the Government to oppose organ harvesting practices. The motion was accepted unanimously by all parties. (Courtesy of John Madigan)
Asia & Pacific

Senator Madigan said that the support of the Labor Government, Liberal Opposition and the minority Parties was a positive step in the right direction for bringing attention to the unethical sourcing of organs in China.

The Australian Senate unanimously passed a motion on March 21 urging the government to oppose the practice of organ harvesting in China.

The motion was introduced before the 76-member Upper House of the Australian Parliament by Senator John Madigan from the Democratic Labor Party. Madigan said that the support of the Labor government, the Liberal opposition, and the minority parties was a positive step in the right direction.

“I believe this motion goes a small way towards bringing organ harvesting to the attention of the Australian Parliament and the Australian people,” Madigan wrote in an email to The Epoch Times.

The motion called for the government to support the actions of the Council of Europe and the United Nations in addressing the practice of organ trafficking.

The European Parliament heard testimony about organ harvesting in China during a Dec. 6, 2012 hearing on human rights in China.

The senate motion also calls on the government to follow the example of the United States in implementing a new visa requirement. In the United States, applicants for non-migrant visas classified as DS-160 must specify if they have been involved in the “coercive transplantation of human organs or bodily tissue”.

“There are many countries around the world…that are taking a stand against their citizens receiving organs sourced unethically. Australia can follow in the steps of the United States,” Madigan said.

“Nationally, we can regulate the training of our doctors and ensure that Australian doctors and international doctors trained in Australia are not involved in these practices. We can also increase our efforts to collect statistics on the organ transplants”.

Parliament held a private briefing on the topic of forced organ harvesting in China on March 20, a day before passing the motion.

David Kilgour, Nobel Peace Prize nominee and former Canadian Member of Parliament, was the keynote speaker at the event.

Together with human rights lawyer David Matas, Kilgour conducted an independent investigation into allegations of organ harvesting from Falun Gong practitioners in 2006.

Direct phone calls to Chinese hospitals, eye witness interviews, and investigative research led the Canadian duo to conclude that large “live organ banks” were the only plausible explanation for the thousands of transplant operations that occurred in China between 2001 and 2005.

According to the Kilgour-Matas report, an unexplained 41,500 transplant surgeries took place during that period of time in China—the time when the persecution of Falun Gong was most severe, he said.

Kilgour said that China does not have a formal organ donation programme, as culturally, it is believed that the organs should not be taken from the body.

“Almost all organs for transplants, by the admission of the government of China, come from prisoners,” said Kilgour during the parliamentary briefing.

This was the second private briefing in the Australian Parliament on the topic of organ harvesting in the past six months. In November 2012, the Human Rights Subcommittee of the Joint Standing Committee on Foreign Affairs Defence and Trade invited an investigative researcher and author Ethan Gutmann to present his latest findings on the subject.

His research, which involved over 100 interviews with eye witnesses, indicated that at least 65,000 Falun Gong practitioners were murdered to source the lucrative organ trade in China.

In 2011, the Chinese Ministry of Health and Red Cross set up a pilot organ donation system in 11 provinces and municipalities, with very limited response.

During March 2011, an article in Beijing Today stated that “In Nanjing, the capital of Jiangsu Province, [one of the 11 sites], not one person has elected to be a donor. Success was equally absent in other regions. As of last Thursday, only 37 people nationwide had registered to donate their organs.”

Meanwhile, the Chinese Deputy Minister for Health Huang Jeifu stated at a Madrid transplant conference that between 1997 and 2008 China had performed more than 100,000 transplantations, with over 90 per cent of the organs being from executed prisoners.

Meanwhile, the international attention toward the topic of forced organ harvesting has been increasing.

Both pieces of legislation penalize any transplant patient who receives an organ without consent of the donor where the patient knew or ought to have known of the absence of consent.

In 2008, Israel passed a law banning the sale and brokerage of organs and ending funding through the health insurance system of transplants in China for Israeli nationals.

In September 2012, a hearing was held in the U.S. Congress urging greater action from the Government to stop organ harvesting in China.