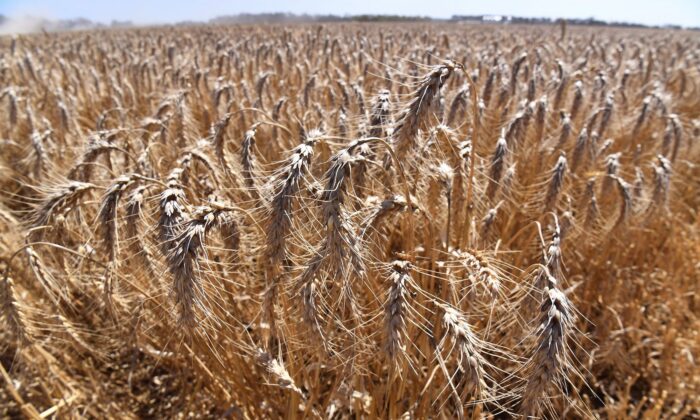 A photo shows a field of wheat on a farm near Inverleigh, some 100 kilometers west of Melbourne, Australia, on Jan. 12, 2021. (William West/AFP via Getty Images)
Australia

An Australian led team of international researchers has discovered a gene in wheat that helps produce higher quality crops.

The scientists say the discovery could lead to increased protein in wheat by up to 25 percent with the potential to help improve its nutritional and economic value.

Researchers from the University of Adelaide and the UK’s John Innes Centre have identified the genetic driver that improves the yield traits of wheat.

Lead researcher Scott Boden from the University of Adelaide said the significant discovery follows revolutionary progress in wheat science over the past decade.

The scientists say it is the first known example where a forward-genetics screen of a mutant population has been used to identify a gene that controls reproductive development in wheat.

“If you identify genes that control flower development and you modify them so that more flowers are produced, then you can increase the productivity or yield of the plant,” he told AAP.

He said the research was partly driven by the need to increase food security for the increasing human population.

“Probably the most significant discovery is the effect on grain protein content, because if it does translate into modern varieties then it far exceeds anything we can do currently.”

The discovery was made after the plants were grown in the field, with the mutation helping to increase the crop’s protein content.

“The increase in protein content occurs without the trade-off of a reduced yield so this discovery has even better potential to provide economic benefit to breeders and growers than just the increased nutritional value by itself.”

Boden said the crops are not genetically modified as there is no foreign DNA being introduced into the plant.

The team expects the new wheat varieties to be available to breeders within three years, with farmers to potentially see the benefits within the decade.

The research has been published in the journal Science Advances.