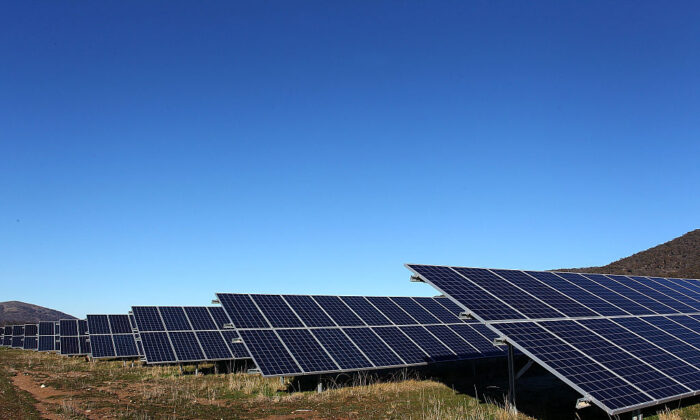 An Australian company looks set to revolutionise the renewable energy industry with its “game-changing” development for solar farming.

Solar Company, 5B, from New South Wales (NSW), has developed revolutionary portable robot solar farms which they call  “Mavericks” that deploy 10 times faster than conventional solar and generate twice the amount of energy on the same amount of land.

“No matter what side of politics you’re on, we’re talking about the next industrial revolution,” Chief Operating Officer at 5B, Nicole Kuepper-Russell, said.

The Morrison government agrees; with the federal Minister for Industry, Energy and Emissions Reductions, Angus Taylor, announcing on Jan. 18 that it would be providing the company with $14 million (around US$10 million ) to support 5B’s $33.4 million strategic technology innovation project at its headquarters in Mascot, Sydney.

The project will help provide Australia with low-cost solar panels, a reliable renewable electricity system that will help lower emissions.

“The 5B Maverick solar arrays manufactured in Sydney will not only reduce power costs but also improve speed and ensure reliability and safety for solar energy consumers,” Taylor said.

The funding will also help 5B overcome its current difficulties with the speed of manufacturing the Mavericks, which consists of up to 90 solar panels mounted on uniquely designed racks.

“It takes two people about a day to assemble a Maverick block or unit,” Kuepper-Russell said.

5b hopes to address the assembly issue with a new tech innovation program that will help them construct an automated Advanced Manufacturing Pilot Line (AMPL), which will be able to assemble 40 Mavericks a day and by 2030 produce them for as little as 30 cents (20 cents) per watt.

“The world needs massive scale, ultra-low-cost solar power fast, and this funding will accelerate the delivery of that,” Kuepper-Russell said.

5B is also looking to develop a GPS guided deployment for the solar robots, which will automate the Maverick’s installation. So although three people and a forklift will be required to deliver an array of Mavericks, the manual work of alignment will be eliminated.

This technology will be a “game-changer in the industry,” said Taylor.

The funding injection by the Australian government will be supplied through a grant from the Australian Renewable Energy Agency (ARENA) under its Advancing Renewables Program (ARP) and will help ARENA achieve its ambitious target to improve solar efficiency by 30 percent and reduce the cost of solar to 30 cents (US 20 cents) per watt by 2030.
ARENA CEO Daren Miller said.

“While solar PV and wind are recognised as the lowest cost form of generation in Australia today, further cost reductions are required to optimise Australia’s transition to renewable electricity and to enable emerging industries such as renewable hydrogen and low emissions metals,” Miller said. “5B is an Australian success story at the forefront of solar innovation. Having started in 2013, they are now becoming leaders in locally manufactured ultra-low-cost solar products that could reshape our solar industry and achieve our important aim of 30 cents per installed watt at utility-scale by 2030.”

Additionally, ARENA said that 5B’s innovations will help the agency to fulfil its ultimate goal of zero net emissions by 2050, which will require a solar energy output that is 300 times Australia’s
current output.

Federal Assistant Minister to the Minister for Industry, Energy and Emissions Reduction Tim Wilson noted that the investment by Arena was another example of how the federal government was pursuing its decarbonisation strategy through technology.

“5B’s pilot deployment system will cut the cost of solar, increase scalable solar solutions and drive uptake. 5B will support heavy industries produce and use low emission materials such as green steel and aluminium.”

At present, 5B has installed robot solar farms or “Mavericks” in Australia, Latin America, the United States and India, with Kuepper-Russell noting that the company has already put 32 megawatts on the ground and have lots in production.