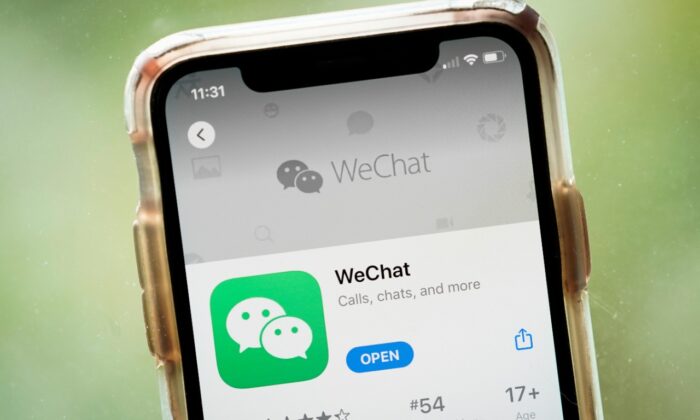 WeChat app is displayed in the App Store on an Apple iPhone on August 7, 2020 in Washington, DC. (Drew Angerer/Getty Images)
Australia

According to the Daily Telegraph, the account’s name was changed from “Scott Morrison” to “Australian Chinese New Lifestyle.” A search on WeChat for an account under the name “Scott Morrison” by The Epoch Times also yielded no results.

The Australian Broadcasting Corporation (ABC) found that the CEO of an information technology firm, Huang Aipeng, had purchased the prime minister’s account from a Chinese national only known as Mr. Ji.

Ji was part of the agency hired by the prime minister’s office to run his WeChat account—a practice common among politicians and organisations keen to communicate with Chinese-speaking communities in China or overseas (Australia has around 1.2 million ethnic Chinese).

WeChat, however, limits the use of public accounts on its platform to Chinese nationals only, forcing overseas groups to rely on contracting third parties or agents.

According to Huang, who is the leader of Fuzhou 985 Information Technology, he purchased Prime Minister Morrison’s account because it had over 76,000 followers.

“He [Mr Ji] didn’t tell me who was using the account,” Huang told the ABC.

“I don’t even know who [Scott] Morrison is; I saw the account has a lot of followers, so we bought it.”

Huang revealed that he would delete the content previously posted by the prime minister’s team and promote his own material.

WeChat’s parent company Tencent has denied any “hacking or third-party intrusion” occurred regarding the prime minister’s account, according to a statement obtained by AAP.

“Based on our information, this appears to be a dispute over account ownership—the account in question was originally registered by a PRC (People’s Republic of China) individual and was subsequently transferred to its current operator, a technology services company—and it will be handled in accordance with our platform rules.”

“Tencent is committed to upholding the integrity of our platform and the security of all users accounts, and we will continue to look into this matter.”

Federal Liberal Party MPs have stood behind a boycott of WeChat in reaction to the prime minister’s deplatforming.

Gladys Liu, the member for Chisholm—a multicultural electorate in Melbourne’s east—called the incident with Morrison “deeply disappointing” and that it raised concerns of political interference.

“It is a matter of record that the platform has stopped the prime minister’s access, while (Opposition leader) Anthony Albanese’s account is still active featuring posts criticising the government,” she said in a press release on Jan. 24.

“In an election year especially, this sort of interference in our political processes is unacceptable, and this matter should be taken extremely seriously by all Australian politicians.

“Because of these concerns, I will no longer be using my official or personal WeChat accounts to communicate until the platform explains itself,” she said.

Albanese told 2GB earlier on the day that he would welcome a discussion with the prime minister on the issue.

“I’m certainly of real concern about any national security implications by any interference by any government in the process, but I do note we haven’t heard anything from the prime minister himself about these issues,” he said.

“This sort of political distorting of a communication platform … obviously deserves condemnation and shows that WeChat as a communications platform cannot be trusted,” he told Sky News Australia.