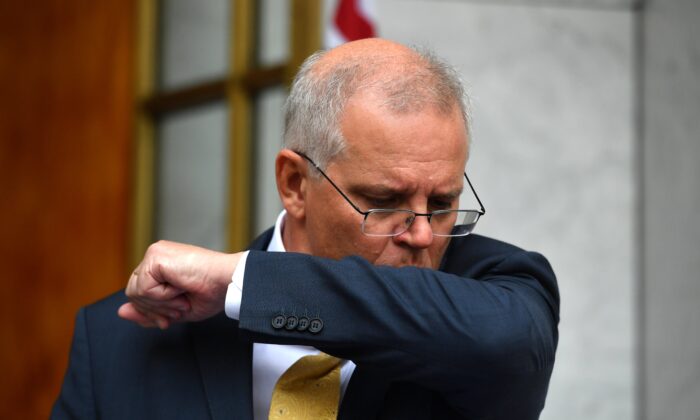 The Australian Prime Minister Scott Morrison has confirmed that he has tested positive for COVID-19.

In a statement released on Tuesday evening, Morrison said that he was experiencing mild symptoms and would be working from home as he isolates for the following week.

“I am experiencing flu-like symptoms and will be recovering over the next week,” Morrison said.

The prime minister had been undergoing daily testing since Sunday when he began to feel unwell, all of which returned a negative result.

After developing a fever late Tuesday, Morrison took a PCR test which returned a positive result.

“I am continuing to follow health guidelines and am isolating at home in Sydney,” he said, adding that he was thankful his family have all tested negative, but will also isolate for seven days as per guidelines.

The Australian prime minister has received the two-dose regime of the COVID-19 Pfizer vaccine and a third booster shot.

Tonight I tested positive to COVID-19.

I am experiencing flu-like symptoms and will be recovering over the next week.

I had tested myself daily since Sunday, including this morning, with all tests returning a negative result.

Morrison said he will continue to discharge all responsibilities as prime minister, including virtually chairing National Security and Expenditure Review committee cabinet meetings and focusing on the emergency response to the devastating floods in the states of Queensland and New South Wales.

“And ensuring we stand with each and every one of the affected communities both now and as the waters eventually recede,” he said.

“I will also be focused on our urgent response to the tragedy unfolding in the Ukraine and Russia’s senseless aggression, staying in regular contact with our security and intelligence officials and our international partners, as well as working with the treasurer to finalise the budget,” he said.

Defence Minister Peter Dutton said Morrison’s sickness was “very mild” and he was “back up” on Wednesday.

“So I think he’s just going to work from home, but feels pretty good within himself and hopefully back on deck ASAP,” he told Nine’s Today program.

Dutton held a press conference with Morrison on Tuesday announcing further flood support from the Australian Defence Force and $70 million (US$50 million) in lethal aid to Ukraine.

He tested negative for COVID-19 after conducting a Rapid Antigen Test on Wednesday.

Other members of the federal government have offered their support for the Prime Minister on Facebook.

Treasurer Josh Frydenberg, who recovered from COVID-19 in January, said “Rest up, PM!” while Victorian MP Gladys Liu said “hope your COVID is mild like mine.”

Morrison was scheduled to join NSW Premier Dominic Perrottet on Tuesday night at the Sydney Opera House, where the iconic building was lit up in the colours of the Ukrainian flag. But, he pulled out at the last minute.

Earlier in the day, he had said it was intended to send a “very strong message of solidarity” that Australia stood with Ukraine.