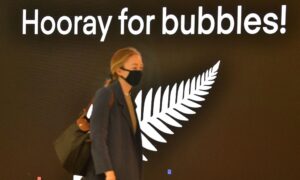 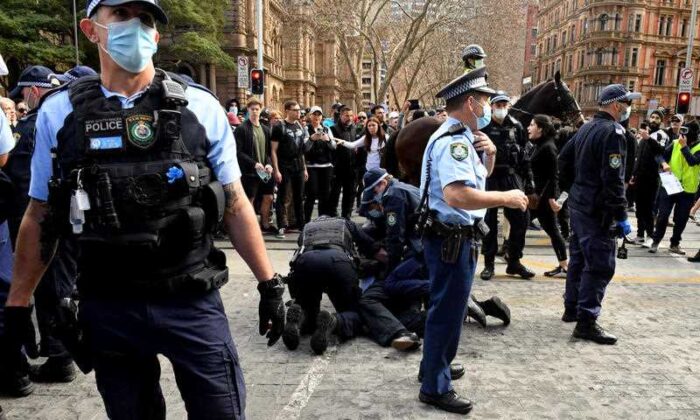 Police are looking for the thousands of people who attended anti-lockdown rally protests in Sydney and Melbourne at the weekend.

NSW Police said they have received 5000 tip-offs and identified more than 200 people who attended after a special task force was set up in the aftermath of the protest.

Some 57 people have already been charged, and 90 fines have been issued after it was estimated more than 3,500 people marched through Sydney’s CBD on July 24, demanding an end to the city’s four-week lockdown.

A 33-year-old Surry Hills man and a 36-year-old man from Edensor Park faced court on Sunday after they allegedly struck a police horse during the protest.

The Edensor Park man was also charged with assaulting a police officer.

Police are calling for members of the public are being asked to upload any videos or photos of the protest to CrimeStoppers to track down more participants.

Meanwhile, in Victoria, 73 people have been fined and six people arrested for attending the protest. A further person was charged and bailed for assaulting an emergency worker.

Victoria Police Assistant Commissioner Luke Cornelius said police were in the process of reviewing hundreds of hours of footage from social media, CCTV and body-worn cameras with more fines to follow.

“I would say that every Victorian who’s outraged by this, if you know who those people are, call CrimeStoppers and let us know who they are and we will take action.”

Their investigation will include the alleged assault of a mounted officer hurt, who was hit by a flying bollard.

Still, he was reasonably confident it would not become a super-spreader event, given the state’s 11 new cases on Sunday had all been linked and were in isolation.

NSW Premier Gladys Berejiklian said she was disgusted and heartbroken by those who had shown “utter contempt for their fellow citizens.”

“We know that events like that can cause those super-spreading events,” she said on July 24, as the state recorded 141 new COVID-19 cases and saw two deaths.

“Please know that all of the sacrifices we’ve made over the last three or four weeks, in particular, have resulted in us being able to stabilise the growth in cases.

“We don’t want a setback, and yesterday could have been a setback.”