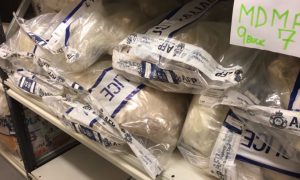 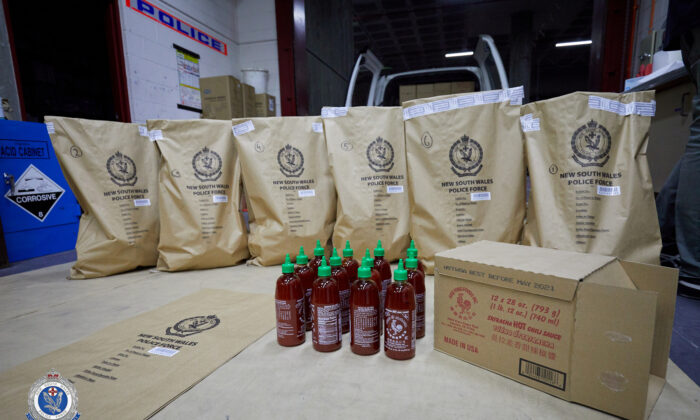 Four men have been arrested for smuggling 400 kilograms of crystal meth, or ice, worth an estimated A$300 million ($210 million) concealed in bottles of sriracha hot chili sauce from the United States, Australian police said on Thursday.

A search of an air cargo consignment that had arrived at a Sydney freight depot from the United States on Oct. 15 found 768 bottles of sriracha chili sauce, “with presumptive testing returning a positive indicator for methylamphetamine (ice),” New South Wales state police said in a statement.

Police arrested a 36-year old on Sunday and made two more arrests on Monday in the carpark of a hotel in Sydney’s central business district.

Photos released by the police also showed several cartons of the fiery sauce bottles stacked in the back of a car. Police seized eight boxes containing sriracha sauce bottles from the vehicle and a search of the hotel suite found another 26 boxes.

The three Australian men have been charged with attempt to possess a commercial quantity and the unlawful importing of a border-controlled drug. A fourth man was arrested on Thursday morning and is expected to be charged later in the day.

“This has been a complex investigation and we know the methylamphetamine in this import was headed for a clandestine lab in the Sydney Metropolitan area for the extraction process to occur,” State Crime Commander Stuart Smith said in a statement.

“We will conduct further investigations with our law enforcement partners to identify other people linked to the group.”

Ice, or crystal methamphetamine, is one of the most potent varieties of amphetamine drug. The name ‘ice’ became popular due to its white little ‘crystals’ and glass-like appearance.

The Australian Crime Intelligence Commission’s latest figures show a record 30.6 tonnes of illicit drugs were seized nationally in the year ended June 2018, with crystal meth one of the most consumed and seized illicit drugs in Australia.