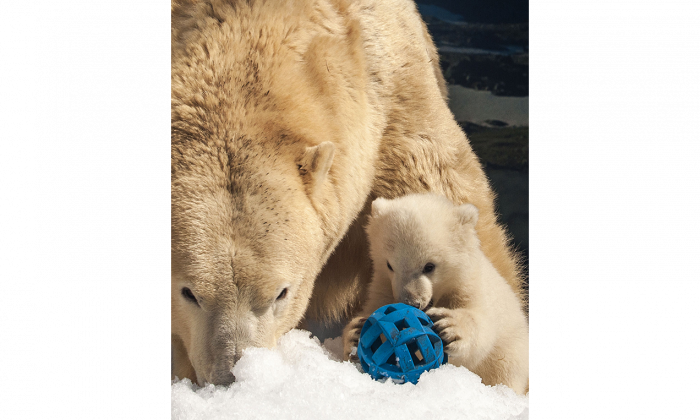 Aussie-born Henry has Canadian heritage
By The Canadian Press

From Down Under to the Great White North—a polar bear has flown halfway across the world to take up residence in a northern Ontario facility.

Henry, a two-and-a-half-year-old polar bear who was born in Australia, is the newest addition to the Cochrane Polar Bear Habitat, where he arrived Wednesday, Oct. 7.

“We are incredibly grateful and honoured that Australia has entrusted us with the care of their bear,” said Karen Cummings, manager of the habitat. “We’re going to do our best to look after him.”

In a way, Henry’s journey is somewhat of a homecoming.

His father was orphaned in the wild in Quebec before being given a home at Sea World Gold Coast Australia (not affiliated with the American Sea World facilities). Henry was subsequently the first polar bear to be born in Australia in almost 30 years.

His current separation from his mother, Liya, is part of his natural development, Cummings explained.

“In polar bear families, it’s not quite like human families. The mother decides the cub has got to get out of the house,” she said. “They do it pretty aggressively.”

With Henry’s mother sending plenty of signals that it was time for her cub to move on, Sea World, which doesn’t have the capacity to house more adult polar bears, began searching for a new home for the 300 kilogram animal and settled on the facility in Cochrane.

“Australia decided it would be a really nice thing that Henry would to return to his family roots,” said Cummings. “After coming to our facility and giving it a good once-over, they decided that ours was the best match for them.”

The Cochrane habitat, which has been running since 2004, describes itself as the only captive bear facility in the world dedicated solely to polar bears. In addition to being open to the public, the facility promotes conservation and provides non-invasive research opportunities for scientists studying polar bears.

Australia decided it would be a really nice thing that Henry would to return to his family roots.
— Karen Cummings, Cochrane Polar Bear Habitat

Henry will now form a part of that research and could possibly, in five years time, be part of a breeding initiative if he is given the green light by the international Polar Bear Species Survival Plan.

The Cochrane Polar Bear Habitat currently houses Ganuk, a five-and-a half-year old male polar bear who the facility hopes Henry will befriend. The facility also cares for Inukshuk, another male, but he is currently in Toronto as part of a breeding program.

Henry won’t be introduced to Ganuk right away. He’ll spend 30 days in quarantine, although he will have access to the outdoors, Cummings said. A priority will be continuing to ensure a smooth transition for Henry, she added.

Arranging a comfortable, worry-free journey for the polar bear was a feat that involved securing the right paperwork, notifying the appropriate authorities, planning a series of flights and determining who would travel with the bear.

Henry was first transferred from Sea World to an Australian military base near Brisbane for a flight to Sydney aboard a C-130 Hercules aircraft. The air force’s involvement cut about 15 hours of transport time for Henry, which made a world of difference, said Cummings.

Once in Sydney, Henry, a bear keeper, and Sea World’s director of marine sciences boarded a Cathay Pacific flight to Vancouver, with a brief refuelling stop in Hong Kong. Upon landing in Vancouver, Henry was set to be transferred to a chartered aircraft that would fly him to Timmins, Ont., after which a customized vehicle would take him the final hour and a half to Cochrane.

“There is a lot that goes on with getting a polar bear,” said Cummings. “But oh my God is it worth it.”