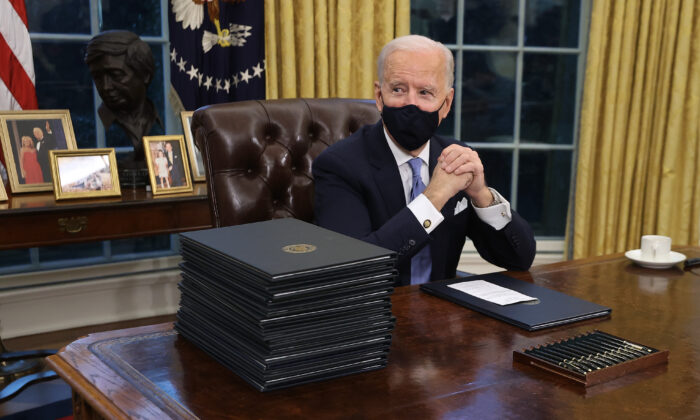 President Joe Biden prepares to sign a series of executive orders at the Resolute Desk in the Oval Office hours after his inauguration in Washington on Jan. 20, 2021. (Chip Somodevilla/Getty Images)
Australia

Australian Prime Minister Scott Morrison has congratulated U.S. President Joe Biden on his inauguration as the 46th president of the United States.

“I wish him every success for his term in office and look forward to working with him and his administration on our many shared interests, particularly in the Indo-Pacific,” Morrison said on Thursday.

“The Australia-US Alliance is deep and enduring and built on shared democratic values such as the rule of law, respect for human rights and equality, freedom of religion and belief, freedom of expression and diversity of opinion,” he said.

Morrison also congratulated Vice President Kamala Harris on her inauguration and as the first woman to hold the position.

“America is a divided country and the last four years have been characterised by a president who often made decisions based upon Twitter,” Albanese told ABC radio.

Albanese said that after more than four decades in Washington politics, Biden was perhaps the most experienced president in U.S. history and had a strong team around him.

“The rise of Kamala Harris to the vice presidency—a woman of colour—reflects modern America as does Joe Biden’s cabinet,” he said.

Biden took the oath of office at noon on Jan. 20 administered by Chief Supreme Court Justice John Roberts. Harris was sworn in shortly before Biden.

Biden’s inauguration took place amid unprecedented circumstances. The president delivered the inaugural address standing before a virtually empty National Mall due to security concerns stemming from the breach of the U.S. Capitol two weeks earlier. Instead of the customary crowd, organisers planted thousands of American flags on the mall.

“We’ll press forward with speed and urgency for we have much to do in this winter of peril and significant possibilities, much to repair, much to restore, much to heal, much to build, and much to gain,” Biden said.

The inaugural address, though not formally a policy speech, offered a glimpse into Biden’s priorities. After addressing the pandemic of the CCP (Chinese Communist Party) virus, commonly known as the novel coronavirus, Biden touched on the issues of racism, the climate, domestic terrorism, and white supremacy. He then called for unity.

“My whole soul is in this, bringing America together, uniting our people, uniting our nation and I ask every American to join me in this cause,” Biden said.

“Uniting to fight the foes we face: anger, resentment and hatred, extremism, lawlessness, violence, disease, joblessness and hopelessness. With unity, we can do great things, important things.”

Earlier in the morning, Trump held a farewell event at Joint Base Andrews before boarding Air Force One en route to Florida. Trump told supporters that he “will be back in some form.”