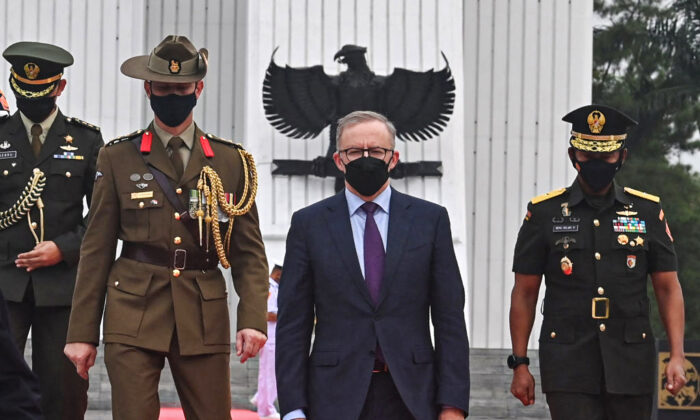 Prime Minister Anthony Albanese has turned up the diplomatic offensive in the Indo-pacific, announcing a range of new partnerships with Australia’s northern neighbour Indonesia during an official visit.

The prime minister pledged to work with major Australian superannuation funds (the fourth largest pension industry in the world) to explore investment opportunities. The government will also advance a $200 million climate and infrastructure partnership.

“True to my government’s ambitious climate targets, I want better access to affordable, reliable, and secure clean energy right across our region as we transition to a net-zero world together,” Albanese said in his opening remarks at Bogor Palace, the president’s official residence.

Australia will also supply expertise to help Indonesia as it builds a brand new capital city, Nusantara, away from the existing capital Jakarta, which currently suffers from overpopulation and congestion.

Education exchange will also be expanded with Australia increasing its intake of working and holiday visas to Indonesia by another 5,000 allocations per year by 2025.

Albanese also announced 10 “recover together, recover stronger” scholarships for Indonesians to complete Masters and PhDs in Australia. At the same time, the teaching of Bahasa Indonesia will also be promoted locally in Australia.

Building stronger relations with Indonesia and ASEAN will continue to be a focus of the Labor government, with an additional $470 million to be delivered over four years to Overseas Development Assistance programs in Southeast Asia, and the appointment of a dedicated envoy to the region.

Albanese and Wong have embarked on high-level visits in the first few weeks of winning office, with the foreign minister also making two trips to the South Pacific.

All this comes amid a backdrop of increasing tensions with the Chinese Communist Party and also overtures from Beijing to strengthen ties with Southeast Asian and Pacific nations.

“Strategic competition in the region must be well managed to avoid open conflict,” Indonesian President Widodo told reporters on June 6. “The culture of peace and strategic trust needs to be strengthened continuously.”