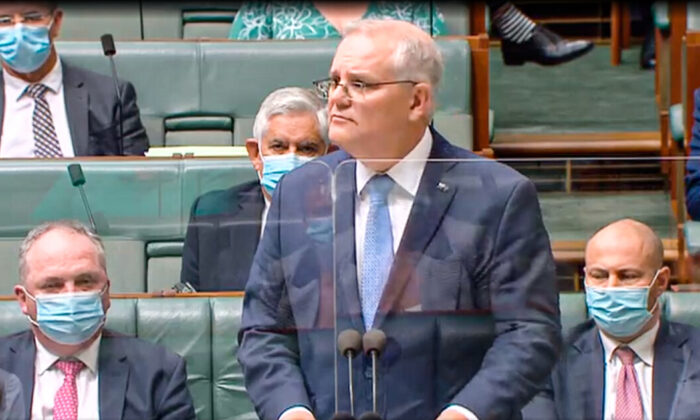 Australian Prime Minister Scott Morrison apologises to abuse victims in the House of Representatives at Parliament House in Canberra, Australia, on Feb. 8, 2022. (Screenshot by The Epoch Times)
Australia

Australian Prime Minister Scott Morrison has apologised directly to former Liberal staffer Brittany Higgins who was allegedly raped after hours in the federal parliament, as well as to other staffers who have experienced bullying, abuse, and harassment in the country’s seat of power.

Morrison said a review into parliamentary culture found that a “power imbalance” had long been exploited, creating an “ecosystem” that resulted in traumatic experiences, particularly by female staff and politicians.

“This review speaks of a long standing culture—generations of culture—in this place, and in the building before it, of bullying and harassment that has occurred over this time, and a power imbalance over that time that has been exploited,” Morrison said on the floor of Parliament on Feb. 8.

“That exploitation, abuse, bullying, and harassment has played itself out through terrible, traumatic, and harrowing experiences—the harassment of staff, particularly female staff, as well as the harassment of female members and senators.”

The revelation last year of Higgins’ allegations triggered a review into the workplace culture of the federal parliament by Sex Discrimination Commissioner Kate Jenkins, who recommended the public apology.

“I am sorry. We are sorry. I’m sorry to Ms Higgins for the terrible things that took place here. And the place that should have been a place of safety and contribution turned out to be a nightmare,” the prime minister said.

Higgins alleged that she was raped in March 2019, before the federal elections, in a ministerial office after entering Parliament House late at night with a male colleague after drinking heavily at a work function off-site

Both Higgins and her accused attacker, a Queensland man named Bruce Lehrmann, worked for then-DefenceIndustry Minister Linda Reynolds, in whose office the alleged rape took place.

Lehrmann has pleaded not guilty to the charge and a trial date has been set tentatively for June 2022.

The parliamentary apology was among 28 initiatives called for by Jenkins who found one-third of staff surveyed across Commonwealth parliamentary workplaces had been sexually harassed.

While warning perpetrators that any abuse would come to light, Morrison cautioned that all allegations would be dealt with under the “rule of law” and proceed on the basis of “fairness and justice.”

Addressing Higgins during his apology, Albanese said: “You have torn through a silence that has acted as the last support system for the most odious of status quos. To describe your experiences is to relive them.”

Albanese said the Jenkins report had “exposed a damaged culture” with its “piercing honesty” about the treatment of both women and men in parliament.