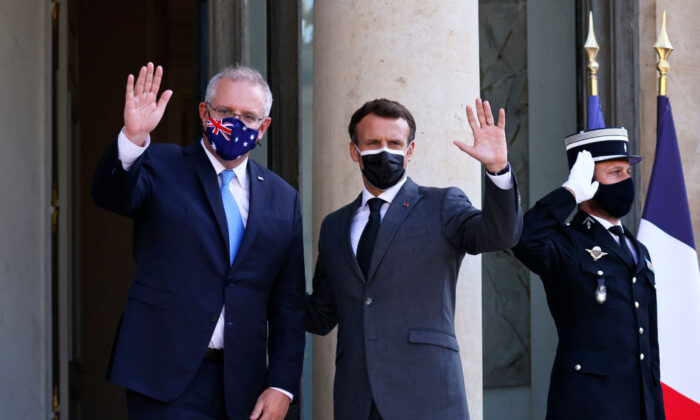 Prime Minister Scott Morrison has said that French-Australian diplomatic ties are heading back in the right direction after a phone call with President Emmanuel Macron.

Morrison spoke to his French counterpart on Thursday for the first time since Australia scrapped a $90 billion submarine deal with Naval Group and opted instead for an agreement with the United States and the United Kingdom on nuclear-powered subs.

On arrival in Italy on Friday night for a Group of 20 (G20) meeting, Morrison told reporters he very much appreciated that Macron had reached out to make a personal call to him, and Australia respected and understood the obvious disappointment of France.

“So we’ve started the way back, I think that’s a positive thing. Of course there will be candid conversations at the start as we deal with the issues as they’ve presented,” he said.

“The way you build back those relationships is you work together on the things that matter to us both,” Morrison said, referencing shared interests in the Indo-Pacific and policies on oceans and technology.

“Antarctica is another key area and Australia is a highly reputable operator there. I know France equally has their interests there,” he said.

The call between the two leaders delayed Morrison’s departure from Canberra on Thursday night for the G20 summit in Rome.

The federal government said the phone call came after Morrison wrote a letter to Macron in October.

U.S. President Joe Biden told reporters after meeting Macron overnight that the United States had been “clumsy” in its orchestration of the AUKUS agreement.

“I was under the impression that France had been informed long before that the deal was not going through,” Biden said Oct. 29 during a meeting with Macron in the French Embassy to the Holy See.

“I honest to God did not know that you had not been.

“I think what happened—to use an English phrase—what we did was clumsy,” Biden said. “It was not done with a lot of grace. I was under the impression that certain things had happened that had not happened.”