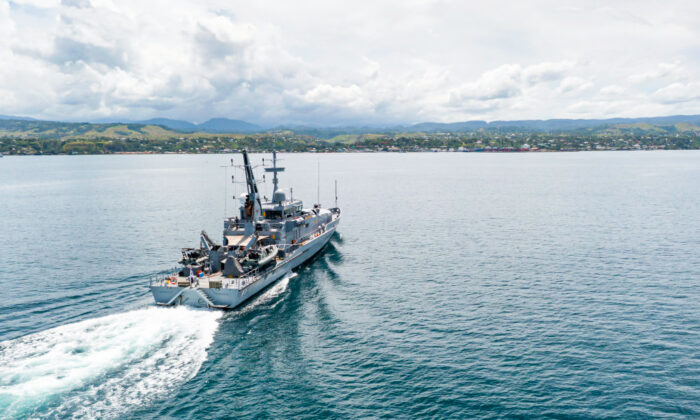 Australian Prime Minister Scott Morrison said a Chinese military base in the Solomon Islands would cross a “red line” for Australia following the recent revelation that the Chinese Communist Party (CCP) has signed a security deal with the Pacific nation that could open the door for Beijing to station troops and weapons in the region.

Morrison’s comments come after a U.S. delegation, led by Indo-Pacific coordinator Kurt Campbell, wrapped up a meeting with Solomon Islands Prime Minister Manasseh Sogavare, where they engaged in a “substantial discussion” regarding the implications of the deal.

A later statement from the White House warned that the United States would “respond accordingly” if Beijing were to set up a military presence in the Solomon Islands. The delegation also met with religious leaders and key members of the political opposition who have raised concerns about the agreement.

Morrison said on April 24 that the security agreement is a “shared concern” among governments.

“Working together with our partners in New Zealand and, of course, the U.S., and I share the same red line that the U.S. has when it comes to these issues,” he told reporters.

Defence Minister Peter Dutton has been more direct in his assessment of the situation, saying that the only way to preserve peace was to “prepare for war.”

“That’s the reality. We are a country with a proud heritage that we commemorate today, the most important day on our calendar,” Dutton told the Nine Network on ANZAC Day, a day of remembrance to commemorate Australian and New Zealand military personnel who served in World War I. “We’re determined to make sure we can have peace in our country.”

The Australian centre-left Labor Party opposition has continued its attack on the governing coalition, claiming that it has failed to prepare for the complex strategic circumstances that the Indo-Pacific finds itself in.

However, Labor Party defence spokesperson Brendan O’Connor admitted that bribery of officials in the Solomon Islands may have played a part in Beijing getting its deal over the line.

“It may well be the case that they’ve acted in an improper manner in terms of convincing the Solomon Islands to enter into such an arrangement,” he told ABC Radio National.

The Solomon Islands–China security deal, which was signed last week, triggered alarms in the United States and among its allies that Beijing may use the accord to establish a military presence in the region and destabilize the Indo-Pacific.

According to a leaked draft of the agreement, Beijing would be able to dispatch police, troops, weapons, and even naval ships—with the consent of the Solomon Islands—to “protect the safety of Chinese personnel and major projects in the Solomon Islands.”

The location of the Solomon Islands is critical; it was the scene of extensive fighting during World War II because of its influence over sea lanes. The security deal would expand Beijing’s reach beyond the South China Sea to within 1,700 kilometres (1,060 miles) of Australia’s northern city of Cairns.