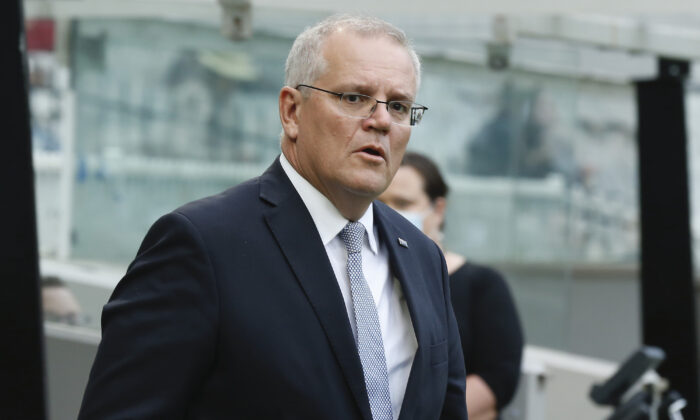 Australian Prime Minister Scott Morrison has headed west in the second week of election campaigning with a sweetener for the defence industry.

The two new Evolved Cape Class patrol ships come after the company delivered its first vessel on March 24. The new project will create 400 jobs and around 150 new jobs across small and medium-class businesses in the Austal supply chain.

“Keeping our borders safe is a key priority for my government, and the acquisition of two more Evolved Cape Class patrol boats will boost the capability of Navy’s patrol force to ensure it is available where and when needed.”

Morrison will spend two days in Perth before heading to Brisbane for the first debate with opposition leader Anthony Albanese.

The leader of the centre-left Labor Party is currently in Brisbane visiting victims of recent floods.

The past eight days of the election campaign have been regarded by many as challenging for Albanese after he made several stumbles in policy launches on the campaign trail and endured a torrid reception on April 17 at the Byron Bay Bluesfest, where he was heavily booed while addressing the audience.

The Labor leader has been working to recover from the first official week of campaigning, which saw him make several incorrect statements that could have affected poll numbers, including his claim that the party’s AU$135 million pledge for 50 urgent medical clinics had been costed by the Parliamentary Budget Office (PBO) when it had not.

“The costing of Labor’s Urgent Care Centre policy is based on work done by the PBO, but for the avoidance of any confusion, has not been formally costed by the PBO,” she wrote on Twitter on April 14. “All of Labor’s policies and costings will be released before the election.”

Deputy leader of the Labor Party, Tanya Plibersek, said voters were not interested in verbal mistakes; instead, they were concerned with reducing the cost of living.

“It is not a test of memory, it is a test of leadership, and Anthony shows leadership every day,” she told the Seven Network on April 18.