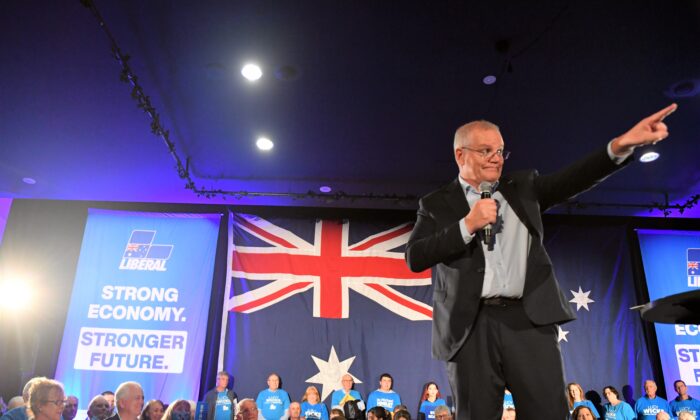 Australian Prime Minister Scott Morrison has been criticised for stating he is “proud” that Australia is “globally recognised” for its current sexual and reproductive health laws, which allows late term abortions without protections for babies born alive from the procedure.

George Christensen, a former member of the Australian House of Representatives, on Saturday published a letter Morrison sent to him in March 2021 regarding Christensen’s proposal for a Human Rights (Children Born Alive Protection) Bill.

At the time, South Australia had just become the last state in the country to partially decriminalise abortion, making the procedure legal in late term pregnancy if doctors believe certain conditions are met, such as psychological, physical, or social factors such as the inability to afford more children or domestic violence.

Citing 237 incidents of babies being born alive during late term abortions in Queensland and Victoria, the Children Born Alive Protection Bill sought to require medical practitioners to take action to save such babies or face significant financial penalties and probable deregistration.

Responding to Christensen’s bill, Morrison wrote that he recognised the depth of the concern raised, but noted that access to abortion services “is the responsibility of states and territories and subject to their respective legislation.”

“This access is an important element of the reproductive and sexual health services the Commonwealth Government supports for Australian women, and we continue to work with states and territories on the availability of safe and legal abortion Australia-wide,” the letter read.

Morrison added that his government is “committed to protecting and promoting the sexual and reproductive health and rights of women and girls,” without acknowledging the rights of dying babies to life-saving medical care.

“I am proud that Australia is globally recognised in this space—it is a core part of our foreign policy and aid program, and we advocate on these issues in international fora.”

It was not the first time that Morrison, who identifies as a Pentecostal Christian, distanced himself from the controversial issue. In the 2019 election, Morrison declared that he holds conservative views on abortion, but refused to enter the debate in New South Wales about decriminalising abortions.

The letter has sparked disappointment among conservatives, with political activist and former managing director of the Australian Christian Lobby Lyle Shelton decrying Morrison’s support for “the killing of unborn babies,” saying the position is “incompatible with the Christian idea that humans are created in the image and likeness of God.”

“This is why Christians have fought for the voiceless and the right to life from conception to natural death,” he wrote on Twitter on Sunday.

Read More
Ashley Bratcher on What Pro-Life Means to Her
‘Unplanned’ Director Says Abortion Workers Are Leaving the Industry Due to the Film
Chapter Seven, Part I: The Destruction of the Family (UPDATED)

It comes following a pro-life rally in Brisbane on Saturday, which attracted about 2,000 Queenslanders and included notable guests such as Liberal National Party Senators Amanda Stoker and Matt Canavan, One Nation Senator Malcolm Roberts, and Christensen.

Speaking at the event, Stoker said that many women are pressured into having abortions from fearful messaging, and having no other easily accessible options for support.

“We should be providing care and support for those women, so they know that terminating their pregnancy is not their only option,” she said.

“It is just wrong that our society seems to be more ready to condemn cruelty against a dog or a cat than it is a human child, even one that is old enough to be capable of life outside the womb.”

The opposition Australian Labor Party (ALP) did not offer much point of difference on its abortion policies in terms of safeguards to protect the rights of the unborn, revealing in early April that its health policies “will not be the same as those taken to the election in 2019,” when it backed a plan to make taxpayer-funded abortion services available nation-wide.

However, during the ALP’s Special Platform conference in 2021, Labor declared it “commits to expanding access” to contraception and termination, and that the party “recognises that there are unique barriers” to access these services.

“Labor will work to improve sexual and reproductive health for all Australians and supports the rights of individuals to make decisions regarding their reproductive health, particularly the right to choose appropriate contraceptives and termination or to continue with their pregnancy.”

The Epoch Times has contacted Albanese’ office for comment but did not receive a response in time for publication.

The Pauline Hanson-led One Nation Party, however, advocates a pro-life policy, such as reigning in the gestational limit for abortions, banning sex-selective abortion, implementing counselling and other safeguards for women considering an abortion, banning the use of aborted baby organs, and requiring medical care for babies born alive during an abortion.

On its website, the conservative party stated it “acknowledges the scientific fact that a human being’s life begins in the womb” and that they were “horrified when state governments passed legislation which legalised abortion up until birth for any reason.”

“This law is one of the most extreme in the western world,” it added.

Australia has decriminalised abortion in all jurisdictions, with NSW and South Australia legalising the practice in 2019 and 2021 respectively.

In NSW and South Australia, abortion is accessible up to 22 weeks, and after 22 weeks if through a specialist medical practitioner given certain circumstances. Tasmania limits on-demand abortions to 16 weeks of gestation.

In Victoria, a woman can access abortions on demand up to a gestational limit of 24 weeks. Beyond 24 weeks, two medical practitioners are required to approve that the procedure is appropriate given the circumstances.