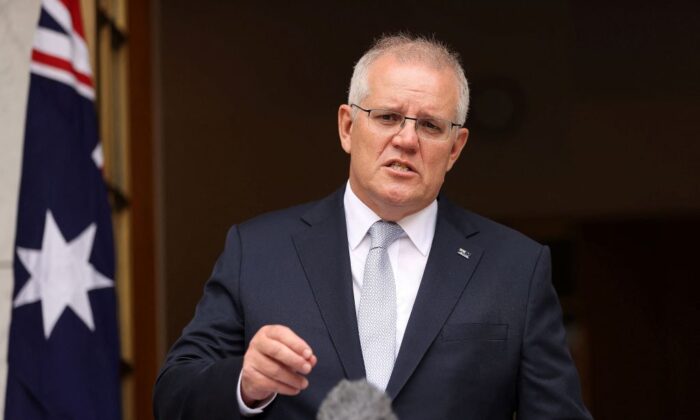 Australian Prime Minister Scott Morrison speaks to the media during a press conference at Parliament House in Canberra on Jan. 6, 2022. (Stringer/AFP via Getty Images)
Australia

Australian Prime Minister Scott Morrison has warned of “very real risks” of conflict involving Russian forces along the Ukrainian border, at the same time, he called out Beijing for not denouncing Moscow for inciting tensions in the region.

Morrison revealed that on the evening of Feb. 14, he met with the National Security Committee of Cabinet to discuss the Ukraine situation in “significant detail” and to work on a potential response with like-minded nations, including the United States, United Kingdom, and Canada.

“We are very well aware of the assessments, and the risks of that occurring at any moment is there, and it’s real,” he told 2SM radio on Feb. 15.

“I got to say one thing too, it’s that like-minded countries, Australia, France, and everyone have been very clear in their denunciation of what Russia is doing,” he said. “There’s one country which is not doing it … and that is the Chinese government.”

“When you have a large country in our own region that suggests they want peace and harmony but yet are not prepared to call out the actions of an autocratic state that wants to violate the territorial sovereignty of their neighbour, then that is very concerning, chilling,” he added.

U.S. officials have advised all its citizens in Ukraine to leave the country, while Secretary of State Antony Blinken announced on Feb. 14 that U.S. personnel were being relocated from the embassy in Kyiv to the western city of Lviv, citing a “dramatic acceleration in the build-up of Russian forces.”

Prime Minister Morrison has also called on Australian citizens in Ukraine to leave urgently. He claimed the threat of a Russian invasion was making the situation “dangerous.”

Meanwhile, Russia has denied it has any intention to invade the Eastern European nation, with Russian Foreign Minister Sergei Lavrov advising the Russian president in a televised exchange to look towards further diplomacy.

“It seems to me that our possibilities are far from exhausted,” said Lavrov in a televised exchange with Putin. “At this stage, I would suggest continuing and building them up.”

“There has been too much information about a full-scale war with Russia–even specific dates have been announced,” Zelensky told reporters on Feb. 12.

“We understand there are risks. If you have any additional information regarding the 100 percent guaranteed invasion of Ukraine by Russia on 16 February, please give it to us,” he said.