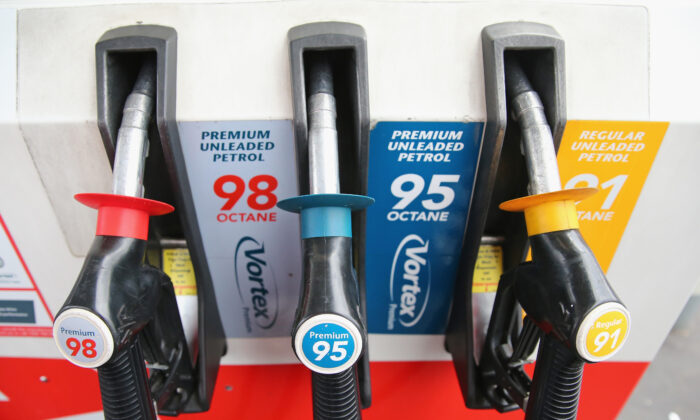 Fuel nozzles rest in a fuel dispenser at a petrol station in Melbourne, Australia, on July 23, 2013. (Scott Barbour/Getty Images)
Australia

Australian Prime Minister Anthony Albanese has insisted on reinstating the full fuel excise tax in September while acknowledging that the country would face more inflationary pressures.

As the tax cut is due to expire on Sep. 29, petrol prices are likely to soar at the end of the month.

The prime minister said that it was a “difficult decision.”

“If prices rise … of course, it has an impact, but that has been factored in, of course, by the economic analysis, which has been done,” he told ABC radio.

“We have to make decisions based upon what we can afford, and we have one trillion dollars of Liberal Party debt.”

As fuel prices are set to rise, economists have expected the Reserve Bank of Australia (RBA) to lift the official cash rate by at least 0.5 percent at its board meeting on Sep. 6, adding more pressure on household budgets.

Speaking about the RBA’s upcoming decision, Albanese said he was fully confident in its inflation management.

“I think it’s appropriate that the government allow the RBA to do its job,” he said.

“There is, of course, a review taking place of the RBA, but … there’s nothing unusual about that. That’s happened before.”

Treasurer Jim Chalmers has asked the Australian Competition and Consumer Commission (ACCC) to ensure that retailers do not raise their prices unreasonably ahead of the reinstatement of the full fuel excise.

In particular, the treasure asked the consumer watchdog to step up its monitoring of anti-competitive behaviours of retailers and analyse fuel prices on a daily basis when the excise tax returned to normal.

At the same time, the ACCC was asked to warn fuel companies against giving customers misleading reasons for price increases.

It was also tasked with informing consumers about the best times to buy petrol using location and price-cycle data.

Chalmers said his letter to ACCC chair Gina Cass-Gottlieb was about ensuring Australian consumers got a fair deal at the pump.

“Refiners, importers, wholesalers and retailers should consider themselves on notice. The ACCC is keeping a very close eye on fuel prices across the country to make sure any increases are justifiable,” he said.

“There should be no doubt that if there is evidence of misleading or anti-competitive conduct by fuel retailers, the ACCC will take action.”