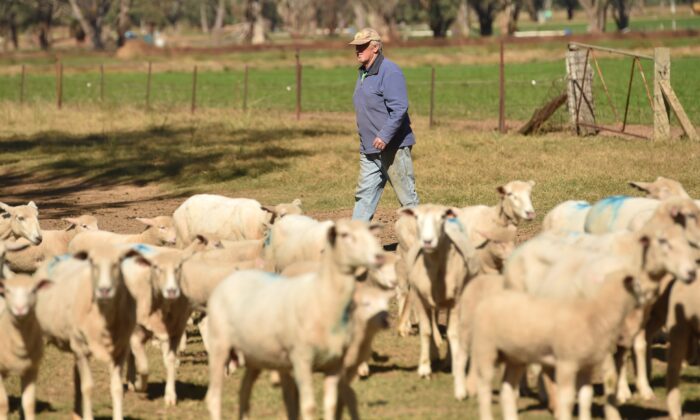 Australian farmer Kevin Tongue herds sheep at his property near the rural city of Tamworth, in NSW, Australia, on May 4, 2020. (Peter Parks/AFP via Getty Images)
Australia

Around 40,000 workers from the Pacific Islands are vetted and ready to migrate to Australia to help address farm labour shortages, Australia’s Agriculture Minister Murray Watt says.

After two days of discussions on jobs and skills in Canberra last week, 36 “concrete plans” to tackle Australia’s economic challenges were established.

They included a lift to the annual migration intake as well as establishing a working group of agricultural sector, union and government representatives in a bid to tackle the labour shortage crisis.

These two announcements, along with a commitment to fast-track the number of fee-free TAFE places, will make a significant difference to the regional Australian workforce, Watt said.

“The reality is that agriculture is not the only industry with a massive worker shortage,” he told Sky News on Sunday.

“There’s a range of measures that we’ve committed to that will start right now that will have immediate benefit for agriculture as we then work on some of the more long-term issues through that working group.”

In addition to workers already in Australia, current estimates show about 40,000 Pacific Island workers who are vetted and ready to migrate for work, Watt said.

“We also want to make sure that we’re encouraging locals to take up careers in agriculture and providing them with the skills that are needed to do so,” he said.

Following the summit the government also announced Australians on the aged and veterans pensions will be able to earn up to $4000 in extra income a year without losing their benefits.

But opposition spokeswoman Michaelia Cash said the announcement was a “half-baked attempt” at a proposal previously made by the former Liberal-National government.

“The adoption of [now Opposition Leader] Peter Dutton’s policy to allow veterans and pensioners to work an extra day per week, employers had been screaming for that,” she told Sky News.

“What do we get from [Prime Minister Anthony] Albanese after the summit? A very strange half-baked attempt to go halfway towards realising what Dutton had put on the table.

“[It’s] a dismal failure and a great disappointment to businesses.”