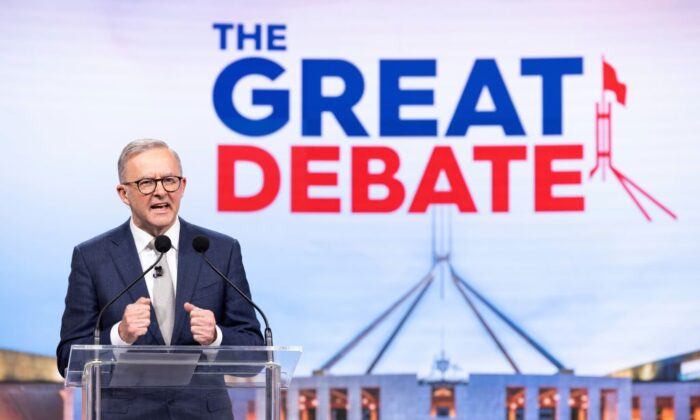 Australian opposition Labor leader Anthony Albanese debates on live television ahead of the federal election, during the second leaders' debate of the 2022 federal election campaign at the Nine studio in Sydney, Australia, on May 8, 2022. (Alex Ellinghausen - Pool/Getty Images)
Australia

Opposition leader Anthony Albanese has resisted promising an increase to average wages in Australia if he wins power at the next election.

One of the key pillars of the centre-left Labor Party’s attack on the incumbent government’s performance has been slow wage growth in recent years.

“Our objective is to have real wage increases, and we have practical plans to do that,” he said during the second televised debate on May 8.

“Putting secure work as an objective of the Fair Work Act, addressing same job, same pay—so the people who were doing the same work, get the same pay—properly defining casualisation, dealing with the gig economy so that people in the economy are properly regulated under the paid minimum wage, and addressing the gender pay gap through greater transparency.”

When further pressed on the matter a day later, the Labor leader said he was “very confident” a positive outcome could be achieved via a planned Jobs Summit between businesses and unions that would “hammer out” a new productivity program to drive wage growth.

“He’s been banging on about this for the last three years, talking about how he can boost wages, but when push came to shove, and he had to answer the question, ‘Can you increase wages?’ Well, he can’t,” he told reporters.

“There’s no magic wand to increase wages. There’s no magic pen that makes it happen. Voting at this election for the Labor Party doesn’t automatically make your wages go up, and Mr. Albanese made that point last night.”

Campbell Newman, former Queensland premier and now-federal Senate candidate, said that while the Labor Party’s goals were worth pursuing, it would require major reforms to workplace law in Australia.

“One of the biggest problems I see in the way he is suggesting it be dealt with is the union movement, which has spent the last 10 years restarting a class warfare narrative,” the Liberal Democrat candidate previously told The Epoch Times.

“It’s a big jump to expect them to sit down and acknowledge that for businesses to get productivity improvements, there need to be real changes to industrial relations, the complexity of awards, and the way that penalty rates are applied,” he said.

Cost of living, including rising inflation and interest rates, is the number one concern among Australian voters, according to Kosmos Samaras, director of Redbridge Group, which conducts polling for the election.

Heston Russell, a former soldier and now-Senate candidate for the Australian Values Party, said the focus on pushing up wages would only price out small businesses. Instead, he said governments needed to “make current wages go further.”

“We can never repeat the economies of scale of much bigger, older, and larger economies who see our resources and can afford them better than we can,” he told The Epoch Times.

The party’s proposal is to attempt to lower the cost of raw materials that make up the goods consumed by Australians, including housing.

“Say you’re going to export goods from Australia, you will need to save—for argument’s sake—four percent of those goods for cost price for the local market. Those companies can then transfer that cost to the other 95 percent being exported overseas,” he added.