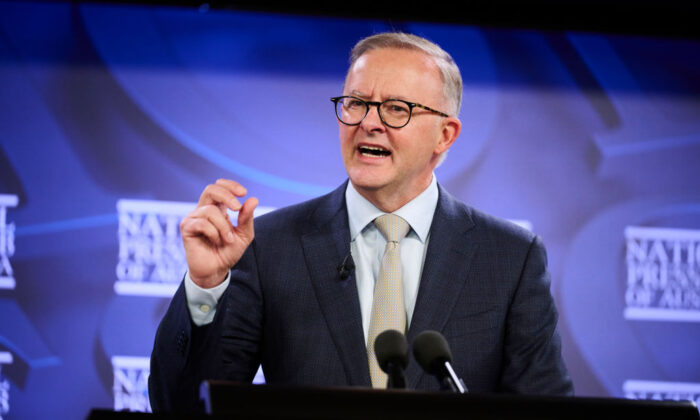 The Labor leader said that, if elected, he would convene a Jobs Summit to bring together the government, business, and trade unions to “hammer out” a new productivity program that could, in turn, spur wage growth.

“Co-operation and collaboration work,” he wrote in an op-ed in the Australian Financial Review on Jan. 27. “In the 1980s and 1990s the Hawke and Keating Labor governments extracted real productivity gains by encouraging employers and unions to work together. Profits went up. So did wages.”

“Since the Coalition took office in 2013, wages have increased by 18 percent. But the price of beef has increased 64 percent. Fruit and vegetable prices rose 22 percent, childcare 44 percent, and health costs 33 percent,” he added.

“The cost of a leg of lamb for a Sunday roast is up 49 percent since the Coalition took over. And if you want to wash it down with a cold beer, the price of your favourite brew has climbed by 26 percent,” he said.

Albanese also called for more investment in infrastructure to ease congestion that would also streamline the cost of conducting business.

Campbell Newman, former Queensland premier and now-federal Senate candidate, said that while Albanese’s goals were worth pursuing, it would require major reforms to workplace law in Australia.

“One of the biggest problems I see in the way he is suggesting it be dealt with is the union movement which has spent the last 10 years restarting a class warfare narrative,” the Liberal Democrat candidate told The Epoch Times.

“It’s a big jump to expect them to sit down and acknowledge that for businesses to get productivity improvements there need to be real changes to industrial relations, the complexity of awards, and the way that penalty rates are applied,” he said.

“I’ve been involved as a member of staff on a number of start-up businesses, and I have seen several instances now where the moment someone doesn’t like the fact they’re on the way out—it’s off to the (Fair Work) Tribunal,” he added. “And usually there’s like $20-$30,000 worth of ‘go-away’ money being paid. Employers need to be able to fire people just as much as they need to hire people.”

In recent weeks, the federal opposition leader has hit the campaign trail and begun to outline his party’s policy initiatives.

On Jan. 25, Albanese pledged $440 million to upgrade school facilities and improve student welfare if he is elected. He has vowed to improve Medicare and reform the federal model.

Exact details were scant however and the Labor leader has yet to fully cost his initiatives.