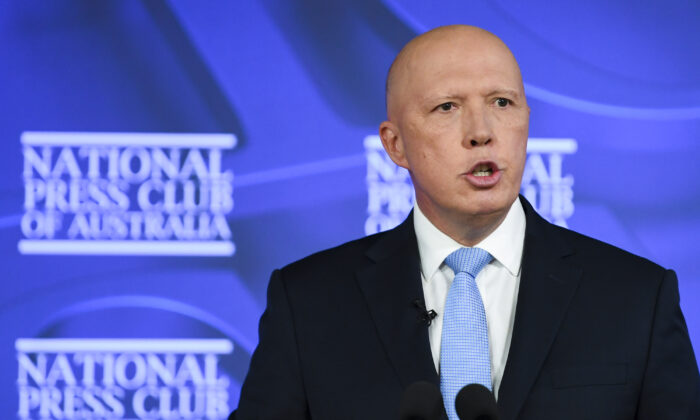 With foot and mouth disease now present across 22 provinces in Indonesia and fragments of the virus found in Australia, Australian opposition leader Peter Dutton has joined fellow opposition members of parliament David Littleproud, Karen Andrews, and Barnaby Joyce in calling for Australia to close its border to the southeast Asian nation.

However, Prime Minister Anthony Albanese and Agriculture Minister Murray Wyatt argue that a border closure is unnecessary as no live virus has been found downunder and the government has strong biosecurity measures in place.

Speaking to 2GB Radio on Monday, Dutton said that the briefing he received on the situation in Indonesia is alarming.

“There’s a herd of 65 million cattle, goats, livestock in Indonesia. There are vaccines for about three million. It’s spread across 22 provinces,” he said.

“And if we get a single case here, a single sheep, a single beast, the whole export industry closes down, it’s an $80 billion (US$55.24 billion) impact on the economy.

“And as I say, it’s not just an impact on people off the land, who would lose their entire herd, but it would have a huge impact—$80 billion worth—on the economy, including huge spikes in prices for meat that people would pay at the checkout or at the butcher.”

However, prime minister Anthony Albanese told Sky News on Sunday that the border won’t be closed because of the strong new biosecurity measures now in place to prevent foot and mouth disease.

“It is important to note Australia is foot and mouth disease free, that our products continue to be available to the world, and it’s important we try to do everything we can to maintain that position,” he said, adding that industry is not suggesting the border be closed.

“Well, the National Farmers’ Federation aren’t saying that, nor are the peak farming organisations,” he said.

Dutton told 2GB that Albanese needs to take the lead in elaborating on why the borders shouldn’t be closed given the seriousness of the situation, rather than leaving it up to Minister Watt, who Dutton said he doesn’t have confidence in.

“So, as I say, if the prime minister’s got additional information that he needs to share with us, then let’s hear it, but at the moment, he’s being silent on that, and I think it’s a very dangerous situation he’s putting our country into,” he said.

The opposition leader also stated that the government has said people are being checked and their shoes are being cleaned at airports, but reports are circulating that it’s not happening.

Watt confirmed on Monday that despite the discovery of the virus fragments, no live foot and mouth virus has been detected in Australia, and the strong biosecurity measures are effective.

“What we did with those fragments was that these were detected during routine surveillance exercises that a lot of people don’t realise we’re doing,” he told the Australian Broadcasting Commission on Monday.

“So what that means is that we remain foot and mouth disease free, but I think it is a reminder that we need to take this seriously, and it’s a reminder that we don’t just need government stepping up to the plate and putting in more resources—which we are—we also need the travelling public to do the right thing and people who are seeking to import products,” Watt said.

Measures the government currently have in place to mitigate the risk of the virus entering Australia include extra biosecurity officers at the border, extra detector dogs, tougher compliance at airports, and the risk profiling of 100 percent of passengers who return from Indonesia.

In response to reports of travellers walking through airports without having their shoes cleaned, Watt stressed that the government has never said every single passenger returning from Indonesia is being thoroughly screened, taken away for questioning, and having their luggage searched.

“You can imagine the chaos that would cause at airports, but what we are doing is risk profiling every single passenger who comes back in the country, and I got some figures from my department over the weekend in response to those reports,” he said.

“Just in Melbourne Airport alone, just on Saturday, there were around 3,700 passengers coming in from Indonesia, who were questioned, who were screened, who had shoes cleaned, some combination of measures to make sure they were safe.”

The reason those passengers were chosen, Watt explained, is that they either declared they had been on a farm, near livestock, or were carrying a related product, or they failed to declare it but were in the risk profiling system and were picked up as a potential risk.

Watt confirmed he had been regularly asking expert advisors on whether the border should be closed, and the advice he receives is that the measure is unnecessary.

He also noted the National Farmers Federation, Cattle Council, and meat processors all oppose closing the border with Indonesia.