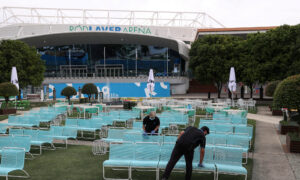 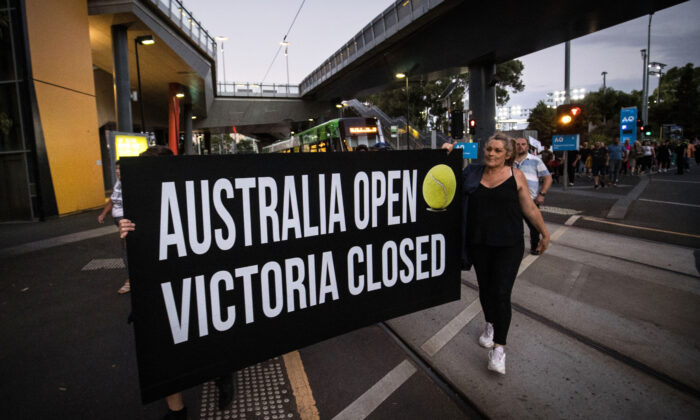 People are seen protesting outside Melbourne Park where the Australian Open is being held on Feb. 12, 2021. (Darrian Traynor/Getty Images)
Tennis

The lockdown is in response to a COVID-19 outbreak at Melbourne Airport’s Holiday Inn with genomic testing confirming that infected individuals have the “hyper-infectious” UK strain of the CCP virus. One new case was reported on Saturday with 20 total active cases reported.

“It is the advice to me that we must assume that there are further cases in the community than we have positive results for,” Victorian Premier Daniel Andrews told reporters on Friday.

“It is moving at a velocity that has not been seen anywhere in our country over the course of these last 12 months.”

While Victorians plunge back into an eerily familiar lockdown—with people only able to leave home for four reasons under the stage four restrictions—tennis players can continue “work” due to the nature of their profession, albeit with no crowds.

“There are no fans. There are no crowds. These people [professional tennis players] are essentially at their workplace,” Andrews said.

“The workforce will be the minimum that is needed in order for that to be COVID safe.”

Andrews confirmed that the UK strain of the CCP virus was not linked to the tennis and he has no plans to cancel the event.

“I don’t have advice to cancel the event on the basis that it is unsafe, I just don’t have that,” he said.

Tournament boss Craig Tiley said that contingency plans for the absence of crowds, a player bubble, and games streamed “broadcast only” will be implemented until at least Wednesday.

World number 5, Ukrainian Elina Svitolina, who was among the first players on Saturday to play at Melbourne Park, described the fan-free Australian Open as “disturbing and sad” after playing in front of a crowd Thursday night.

“It was very different conditions—I played a night match at 7 p.m. with a good crowd and now it was completely different,” Svitolina said.

“People give you energy, they are supporting you, they are trying to get you back into the match.”

Aussie favourite and world number one Ash Barty, however, said that for her, the crowd-free conditions helped her focus more on the bounce of the ball and processing the unfolding match.

“It’s kind of a way that you can narrow your focus in to listen to the sound of the ball,” she said.

“It’s just another way for me to be able to absorb the information quickly, to then adjust and change what I need to in order to try and then put the ball in the position that I want to.”

World number 3 Naomi Osaka said while she loved being in front of fans, she supported the Victorian government’s response to the outbreak.

“I know there were quite a few people that weren’t really happy with us being here in the first place, so I think we’re all just really happy to be playing anyway.

At 11:30 p.m. on Friday, the match between world number one Novak Djokovic and American Taylor Fritz was halted so that fans could get home before the midnight lockdown deadline.

“Nothing surprises me any more with what we’re experiencing globally.”

Tournament boss Craig Tiley expects crowds to be permitted to return on Thursday, Feb. 18, at the end of the five-day lockdown and is not offering refunds beyond that date.

Refunds will be given to those who bought tickets for games scheduled during the five day lockdown.

The Australian Open is is scheduled to conclude on Sunday, Feb. 21, with the finals of the mixed doubles and men’s singles.