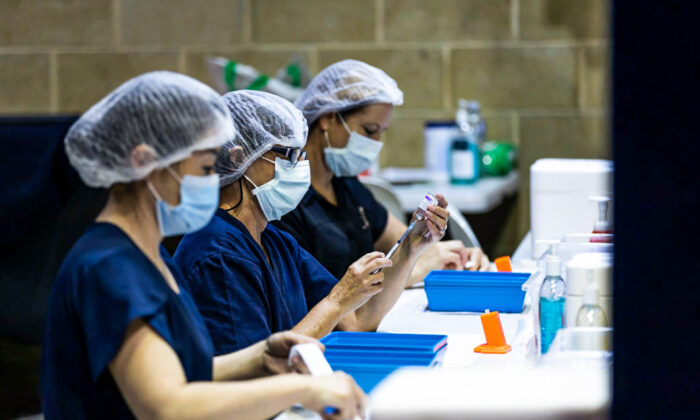 PERTH, AUSTRALIA - APRIL 28: Nurses are seen drawing up doses from a multi-dose vile of AstraZeneca Covid-19 vaccine at Claremont Showground on April 28, 2021 in Perth, Australia. The West Australian Government have opened up two new Vaccine Centres including one at Perth Airport. (Photo by Matt Jelonek/Getty Images)
Australia

A nurse in Western Australia (WA) has been charged with the fraudulent recording of vaccine information after she allegedly pretended to administer a dose of a COVID-19 jab before throwing away the still-full syringe.

WA Police arrested and charged the 51-year-old female registered nurse at her residence on Sunday, Nov. 7.

The woman employed at a private medical centre in St James had obtained approval to vaccinate the teenage child of a person known to her.

It is alleged that the nurse made a false record that the teenager had received the vaccine while also recording that another employee had performed the procedure.

Standard practice for the procedure involves a second medical practitioner to observe the process, who on this occasion was a doctor.

The investigation commenced after the medical centre reported the incident to the police.

The nurse has been charged with one count of “Gains Benefit by Fraud.”

She was refused bail and is due to appear before the court on Nov. 8.

Australia has seen a number of fraudulent vaccine-related incidents.

According to The Age, the nation has seen fake digital vaccination certificates, along with bribes of up to $1,500, which have been offered to medical practitioners in Victoria to falsely record that the vaccine had been delivered.

This news of the arrest comes as WA Premier Mark McGowan announced a “Super Vax Weekend” on Nov. 6 and Nov. 7 to encourage West Australians to roll up their sleeves to get the jab.

“I’ve always said the way out of this pandemic is high vaccination rates, and this remains the case as today I outline WA’s Safe Transition Plan out of the COVID-19 pandemic,” McGowan said in a media release.

McGowan had previously stated that WA would maintain its closed border policy until 90 percent of the state’s 12-and-over population were fully vaccinated.

WA is also the nation’s least-vaccinated state—despite public information campaigns from the government—with around 67 percent of West Australians aged 16 being fully vaccinated, and over 80 percent receiving the first dose.

The state has mandated vaccinations for 75 percent of the workforce, with businesses facing $100,000 fines and individuals facing $20,000 for non-compliance.