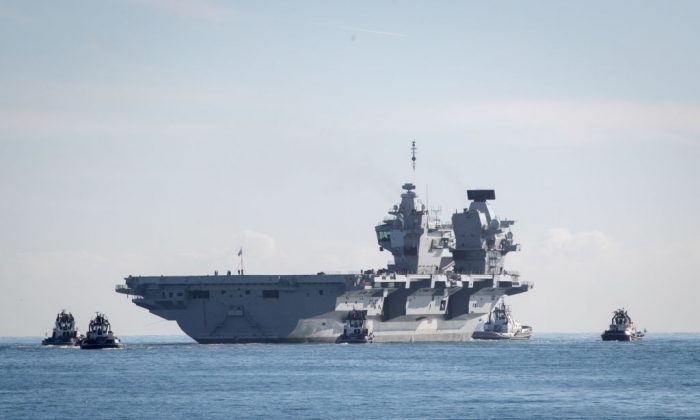 The United Kingdom has invited the Australian navy to accompany its flagship aircraft carrier, the HMS Queen Elizabeth, when it is deployed in the Pacific.

The HMS Queen Elizabeth, which went into service in December 2017, is the largest warship ever built for the Royal Navy.

“We are very much hoping and going to work together on deploying Her Majesty’s Ship Queen Elizabeth to the Pacific and hopefully sailing side-by-side with Australian vessels,” Williamson said.

“We want to make sure that everyone around the world understands that these two nations are the greatest of allies.”

The new carrier’s deployment to the region, expected in a few years’ time when it is fully operational, was flagged by then Foreign Secretary Boris Johnson last year.

“One of the first things we will do with the two new colossal aircraft carriers that we have just built is send them on a freedom-of-navigation operation to [the South China Sea] to vindicate our belief in the rules-based international system and in the freedom of navigation through those waterways, which are absolutely vital for world trade,” he said.

Williamson, however, did not specifically mention whether the carrier would be deployed to the South China Sea.

The enhanced military cooperation between the two countries will be seen as a response to China’s growing assertiveness in the area, including its militarization of islands in the South China Sea.

Williamson said there was an “increasing submarine threat” in the north Atlantic and the Pacific. He said this was the first time since 2013 that Britain has deployed ships to the Pacific region.

“We have [deployed] three [ships] this year,” he said

“This isn’t something we want to see as a flash in the pan but actually a commitment to the region and involvement in the region that goes forward in the coming years.”

Bishop said the “norms and conventions” in the Pacific region were being challenged and welcomed to the UK’s increased participation, which included establishing new British diplomatic offices in Tonga, Samoa, and Vanuatu.

“At such a critical juncture in world affairs, we feel it is vital for like-minded nations to join together to promote peace and stability,” Bishop said.

“We couldn’t be more delighted that the UK will be taking an increasing role in the Indo-Pacific.”