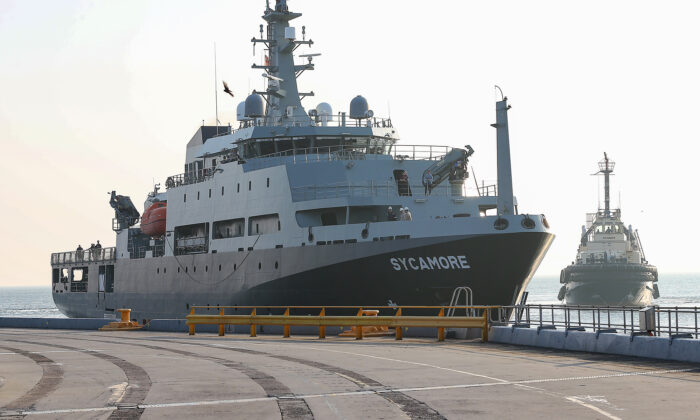 Australia’s wildlife has taken a tragic blow during the country’s devastating bushfires, but less often cited are the dogs, cats, and other domestic pets that have been affected by the fires.

When over 4,000 people, a minority of them locals and the rest tourists, found themselves trapped by the fires in the seaside town of Mallacoota during the holidays, the Australian Navy deployed the cargo ship HMAS Choules to rescue them. The ship ended up becoming a kind of “Noah’s Ark” by accommodating over 250 pets, mostly dogs, but also a few cats, a rabbit, and a bird.

After being taken aboard and being on the water for over 20 hours, the evacuees were brought to Western Port in Victoria, near Australia’s second-largest city, Melbourne.

Passenger and dog lover Kristine Daniels, of Melbourne, happened to pass through the doggie day care area in the cargo bay, and she snapped some candid photos of the canines. “It’s amazing how pets bring out our humanity,” Daniels said, per ABC Melbourne.

The beachside vacation town of Mallacoota normally has a population of a little more than 1,500, but when big holidays like Christmas and Easter come around, the number of people can quadruple or even quintuple. When the Victoria bushfires approached just before New Year’s Eve, thousands of tourists and pets were trapped and had no way whatsoever of getting back home after roads in every direction were closed.

That prompted the Australian Navy rescue, using its cargo ships to evacuate stranded travelers and locals alike. Both merchant vessel Sycamore and HMAS Choules welcomed the desperate people and pets aboard.

On the ship, Daniels’s pictures show cheerful dogs in good hands, cuddling and wandering through the cargo bay. It might have seemed like just a big adventure to the pets; for their owners it was a different story, with some recounting having lost their homes in the blaze. After a terrifying ordeal of escaping the fire, the rescuees were exhausted. Thankfully, their furry friends survived and offered some consolation, for what it was worth—as can be seen from some of Daniels’s photos.

One evacuee, Cassandra Smith, who escaped with her 14-year-old Labrador named Lexi, shared some of her harrowing experiences, per LadBible, “When the worst of the fire passed, it was like a war zone. There were people walking around with flannels on their faces, wearing ski masks.”

Smith, who suffers from asthma, needed special treatment before boarding the navy ship for evacuation. “The Navy set up makeshift containers and pallet boards as pens for the dogs,” she explained. “There were 135 dogs, two cats, two birds and a rabbit—not all in the same area, thankfully.”

“This is the most significant evacuation of civilians I have experienced in almost 30 years in the Navy … The ability to help a mate out is its own reward, but the response from our evacuees and the authorities in Mallacoota and beyond has been overwhelming.”

After evacuating all the people (and pets) who were in harm’s way, the navy ship is now on a new mission to bring another much-needed form of relief to the residents of Mallacoota: a recreational beverage, beer. Local pub the Mallacoota Hotel Motel has arranged for the Choules to bring 3,000 liters of beer to replenish its dwindling supplies and quench thirsts.

“The pub is at the heart of regional communities. And a pub with no beer is bad enough at the best of times,” the chief executive of beer supplier Carlton Union Brewery told 9 News. “After what Mallacoota residents and firies have been through the least we could do is make sure they could enjoy a beer.”

Whether it’s a cuddle with their beloved dogs or a pint of refreshing beer, Australians are doing all they can to survive the fires with their spirits intact, even if their houses and forests aren’t.