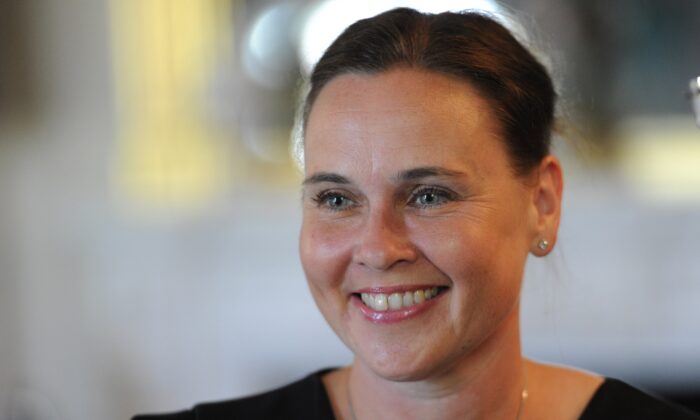 Jane Garrett is sworn in at Government House in Melbourne, Thursday, Dec. 4, 2014. The ceremony follows Victoria's state election on Saturday which saw the Coalition lose office after one term. (AAP Image/Julian Smith)
Australia

Victorian Labor MP Jane Garrett has died from breast cancer at the age of 49.

The former emergency services minister, an MP since 2010, was diagnosed with the disease in 2016 and announced late last year she would not stand for re-election in the 2022 state poll.

Garrett, who served as member for Brunswick and for Eastern Victoria, quit cabinet in 2016 over a controversial firefighters’ union pay deal.

Victorian Premier Daniel Andrews spoke of Garrett’s heartfelt advocacy for working people, and extended the offer of a state funeral as a mark of her “significant contribution to Victoria”.

Her death on Saturday evening was announced in a statement from her family, who praised her “contagious love of life and people”.

“We are devastated by the passing this afternoon of our beloved mother, sister, daughter, dear friend Jane Garrett, following a long battle with cancer,” the statement said.

“Unfortunately, Jane’s cancer recently returned after some time in remission, and she was admitted to hospital earlier this week.

“We wish to thank the staff at the Epworth Freemasons for their love and care of Jane over the last years and in particular over the past week.

“We will remember Jane always for her contagious love of life and people; her intense compassion and the drive which made her a very fierce advocate for women and those most disadvantaged.

“Her intellect, wit and generosity are irreplaceable, and her loss leaves a huge hole in the Garrett family.”

“I am saddened to learn of the passing of the Member for Eastern Victoria, the Hon Jane Garrett MP, after a long battle with cancer,” Andrews said in a statement on Saturday.

“On behalf of the Victorian Government and the Parliamentary Labor Party, I offer our deep condolences to Jane’s family, friends and colleagues – and all those who knew and loved her.

“I cannot imagine the grief her family, particularly her three children, must be feeling at this incredibly difficult time – my thoughts are with them.”

Speaking of Garrett’s decade as a high-profile politician, Andrews said she was “a passionate advocate for the rights of working people and spent her career fighting for safer, secure jobs”.

“Her commitment to education, equality and social justice for all was clear,” he said.

“Jane lived a life of service to the labour movement, to the Labor party, and to our state.”

Former Victorian sports minister Martin Pakula, who stepped down from cabinet and announced his retirement from politics in late June, tweeted his commiserations to Garrett’s family.

“I am very very sorry to hear of the passing of my dear friend Jane. Love and long life to (husband) James, Sasha, Max and Molly,” he wrote.