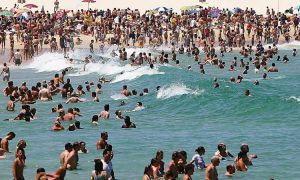 The Magnitsky Bill, which has been legislated in the United States, Canada, and the UK, would enable the Australian government to impose sanctions on any individual human rights violators.

Michael Danby MP told Parliament on Dec. 3, that around the world, the Magnitsky Acts are becoming “a weapon for Democratic pushback by Western governments, against officials connected with authoritarian governments, who engage in serious human rights abuses and corruption in their own countries.”

Above all, the bill will act as a deterrent and provide accountability to individuals who have engaged in activities deemed illegal by international human rights law.

“If you’re the general who sent the military hooligans to shoot down MH17 or you’re the official in Khartoum who sends the Janjaweed militia to murder the Muslim people of Western Sudan, or you’re the Beijing official who has set up concentration camps for a million Uyghur people in East Kazakhstan, you will not like this bill,” Danby said.

The Magnitsky bill is named after Russian lawyer Sergei Magnitsky who uncovered the largest tax fraud in his country’s history and was subsequently detained for a year in a Moscow prison and eventually died under torture in 2009.

The bill, which was initiated by Bill Browder, a British-American fund manager, was first used to target Russians who invested their “ill-gotten gains” into Western countries. It aimed to enforce visa bans and freeze assets, in order to prevent criminals from investing in safe havens, such as the United States, the UK, Canada, and Australia.

“[I]f we can disrupt the safety of their money it really does have a profound impact on their psychology,” Browder told ABC.

Danby said that the Australian Magnitsky Act will partially replicate the U.S. version, and will deal with “corrupt abusers of human rights and corruption all around the world, not just Russia.”

On Dec. 21, 2017, President Donald Trump signed an executive order that imposed sanctions on 13 human rights abusers and corrupt actors. That number has since increased.

“Treasury is freezing their assets and publicly denouncing the egregious acts they’ve committed, sending a message that there is a steep price to pay for their misdeeds,” said Secretary of the Treasury Steven T. Mnuchin.  “At the direction of President Trump, Treasury and our interagency partners will continue to take decisive and impactful actions to hold accountable those who abuse human rights, perpetrate corruption, and undermine American ideals.”

Among that list are Gao Yan, the Burmese military, and Saud al-Qahtani.

Saud al-Qahtani, a senior official of the government of Saudi Arabia, his subordinate Maher Mutreb, Saudi Consul General Mohammed Alotaibi, and 14 other members were added on the Magnitsky list for having a role in the killing of journalist Jamal Khashoggi.

Danby said that he is outraged that many groups are persecuted in China today.

Thank you @MichaelDanbyMP for introducing the Australian Magnitsky Bill. An important step to challenge authoritarian governments like #China who engage in serious human rights abuses and corruption. #auspol https://t.co/SvBOCQJBV5

“I think we are all outraged—and I, particularly with my background, find it incredible—that, in these days, a million Uyghur people could be sent to concentration camps. Xinjiang—or East Kazakhstan,” Danby added.

“Communist Party viceroy, Chen Quanguo, with his monstrous plan to incarcerate a million Uyghurs in concentration camps, will not be forgotten by legislation like this if it is passed and a future federal government has a chance to name him—just as the Christian people are being persecuted in China at the moment, with their churches blown up and crosses blown off the roofs,” Danby continued. “This is something that should attract the support of both sides of politics.”

The Magnitsky Bill will now be passed onto the House committee for public inquiry.