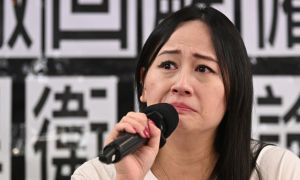 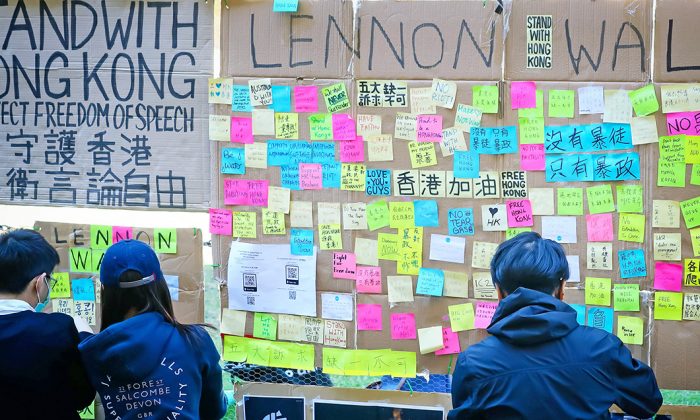 People post notes on a makeshift Lennon Wall to support the Hong Kong democracy movement at the University of Queensland in Brisbane, Australia, on Aug. 9, 2019. (Patrick Hamilton/AFP/Getty Images)
Australia

The federal government is clamping down on foreign interference at Australian universities, a senior member of parliament announced on Aug. 28.

One of the federal government’s priorities will be to seek feedback from students about freedom of expression on campus.

“That will ensure collaboration with foreign entities will be transparent and in a manner that avoids harm to Australia’s interests,” Tehan said, according to AAP.

The announcement came after violence broke out at Hong Kong support rallies in Brisbane and Melbourne.

In Brisbane, pro-Beijing supporters disrupted peaceful students gathered to support Hong Kong’s anti-extradition bill protests by playing and chanting loud Chinese communist propaganda songs, as well as knocking down and destroying pro-Hong Kong signs at the University of Queensland, according to a video of the rally posted to Twitter last month.

NEW FOOTAGE: A pro-Chinese Communist Party student grabs the neck of a Hong Konger protesting against the extradition law at the University of Queensland (Brisbane, Australia) during a clash earlier today (via Facebook). pic.twitter.com/Y57zVOQu5x

The protesters in Hong Kong are demanding the resignation of the city’s Chief Executive, Carrie Lam, and the government’s formal withdrawal of the amendments to the Fugitive Offenders and Mutual Legal Assistance in Criminal Matters Legislation that would allow extradition of dissidents of the Chinese communist regime to be trialed in the mainland’s rule-by-law courts. Many world leaders have since spoken out in support of the protesters.

In Melbourne, Pro-Beijing supporters were also alleged to have pushed and shoved supporters of the Hong Kong protests on Aug. 16, when more than 100 people held a peaceful rally outside the State Library.

The Victorian police had to intervene, with officers questioning two men suspected of unlawful assault. They have since been released pending summons.

Similar rallies were held in Sydney and Adelaide.

The founder of Sydney-based law firm Mark Tarrant Lawyers, Mark Tarrant, told The Epoch Times he is concerned about increasing reports of peaceful demonstrators having their property destroyed, facing intimidation, and even harassment on Australian university campuses for merely expressing their public support for the anti-extradition protests in Hong Kong.

“It is deeply disturbing to see neo-Red Guards menacing and assaulting pro-democracy Hong Kong students, Tibetans, and Uyghurs in Australia,” Tarrant told The Epoch Times in an emailed statement. “S501 of the Migration Act prohibits this sort of behavior, the penalty for non-compliance is visa cancellation.”

Australian Taxpayers’ Alliance director of policy Satyajeet Marar also believes Dutton and Liberal Immigration Minister David Coleman should consider canceling the visas of foreign nationals found guilty of violently interfering with the rights of others to hold a peaceful protest.

“The Australian government must be clear in its stance that people are being deported because of their violent or criminal conduct and not because of their political views,” Marar told The Epoch Times.

“We cannot lecture a foreign government about these values if we do not stand for them ourselves,” he continued. “However, it is an entirely different matter when foreign nationals impinge on the rights and freedoms of others by engaging in harassment, intimidation, threats, and violence.”

Satya Marar: “Given China’s brazen actions in the South China Sea and attempts to influence our political discourse, Australia must send a strong message by cancelling visas of pro-CCP demonstrators who’ve engaged in violence and harassment.”https://t.co/hZzGJ8fUWE

Marar revealed some Chinese nationals even reported the identities of pro-Hong Kong protesters to the local Chinese consulate.

“[This] amounts to complicity in human rights abuse committed by a foreign government overseas,” he said.

“All of these acts, wherever proven, call for the cancellation of visas and the deportation of these individuals.”

A barrister specialising in Australian migration law told The Epoch Times that ministers can cancel a foreigner’s visa if they do not pass the character test. This includes if they are found to “harass, molest, intimidate, or stalk another person in Australia” or “become involved in activities that are disruptive to, or in violence threatening harm to, that community or segment, or in any other way.”

The barrister, who wished to remain anonymous, said in an email to The Epoch Times: “Under these provisions, a person who has incited violence against others, or has destroyed property, or may do so in the future, may find him or herself considered for cancelation.”

The email continued: “Conduct such as [a] history of public rallies causing law and order problems, extremist views, being liable to provoke an incident in Australia may well bring a person to government attention. Indeed, it has done so in the past.”

The barrister added that while there is no “imperative” in the Migration Act that requires ministers to cancel a foreign national’s visa, he found no legal reason why the ministers could not make it a priority to protect the rights of pro-Hong Kong protesters and other dissident groups.

Tarrant said that such visa cancellations do not require a conviction and encouraged ministers Dutton and Coleman to act.

“Minister Coleman should cancel the visas of these pro-CCP thugs for failing the Migration Act’s character test,” he said.

Marar agrees the ministers could use “almost any reason” to cancel a foreign nationals visa. He referred to previous examples where this ministerial power has been applied.

“We’ve seen this happen in the past as controversial, albeit entirely non-violent political speakers, including [British political commentator] Milo Yiannopoulos and [former U.S. Army Soldier and Activist] Chelsea Manning have been denied entry on character grounds,” he said.

The Australian Department of Home Affairs reviewed these proposals and confirmed each time the minister will separately decide whether to cancel a visa.

“Any decision to cancel a visa under section 501 using discretionary powers is made on a case-by-case basis, taking into account all relevant facts,” a department spokesperson said in an emailed statement.

The department urged anyone who feels threatened to report the matter to the police.

“Any alleged criminal behavior should be referred to state and federal police,” the spokesperson said.