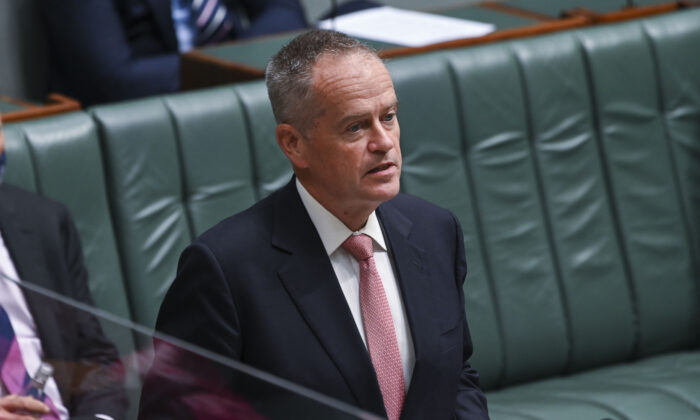 At present, over 1,400 NDIS participants across Australia are waiting an average of 160 days to be discharged from hospitals.

This results in Australian taxpayers having to pay at least $2,300 (US$1,600) a day for each stranded patient, which Shorten described as “madness.”

Under the NDIS, the federal government pays for the costs of supporting people with a permanent and significant disability.

The scheme covers many supporting areas, including independence, involvement in the community, education, employment, health and wellbeing.

While committing to solving the backlog issue, the minister blamed the previous Morrison government for the state of the NDIS he inherited after the Labor party won the May federal election.

“The previous government has just, honestly, ignored the problem (and) I’m genuinely mystified because this is a real issue. It’s got real consequences,” he told ABC Radio Melbourne.

“Hospitals are designed to treat the sick. But if you’re stabilised, you’re better off being at home or in an appropriate special accommodation than a very expensive hospital bed, which also increases your risk of other illnesses.”

Shorten also said that the process of discharging patients seemed to be delayed by bureaucratic decision-making rather than a shortage of suitable accommodation.

In addition, he said authorities made decisions about patients consecutively rather than concurrently, which went against common sense.

“Between the hard-working actions … within the system at a hospital to individual, to disability agency, somewhere between those efforts and outcomes, there seems to be this giant pot of bureaucratic glue which seems to slow everything down,” he said.

“It is an issue everywhere.”

Speaking about the long waiting time of NDIS participants, Dr Bronwyn Morkham, the director of the Young People in Nursing Homes National Alliance, said she was not surprised about the situation.

However, she believed that the issue could be resolved with flexibility and cooperation between the NDIS and health services.

“I think we need some genuine collaboration and cooperation between the NDIS and health services coming together to take a transition approach to take the patients back to the community where they should be,” she told ABC Radio.

“There are specialist disability accommodation options and services available to people. They may not be the intended destination, but they can certainly be somewhere to move people out of hospitals while we get the appropriate accommodation support service organised.”

Meanwhile, Shorten said providing more funding to the NDIS was not the only solution. However, it could fix inefficient processes and enhance transparency.

He also mentioned that part of the solution lay in community mental health funding and the support that schools provided to students with additional needs.

“The answers are not totally hard in some cases,” he said. “I just think you’ve got to have the political will to find them and implement them.”