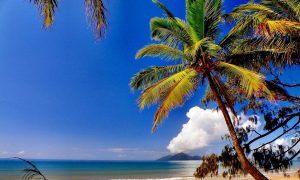 A photo of a monster crocodile that was caught by Australian outback Wrangler, Matt Wright and posted on Facebook has gone viral, but it’s also created some controversy.

Wright uploaded the photo of the saltwater crocodile on Saturday, Aug. 5, garnering over 4,000 likes, 690 shares, and hundreds of comments as of writing.

But most of those comments were from people pointing out the thick layers of white duct tape covering the croc’s snout and eyes. Especially from animal lovers who criticized the use of the tape.

Sally-Jo Famlonga commented, “Did you get enough tape on him? Hope that’s not staying on for too long poor boy.”

Another person said there was no reason to tie the croc up in the first place.

“Am I the only one who disapproves? Looks like a wild area and no reason to wrangle it for trophy sake or relocation. Bet he killed it. There is no caption, info, or anything so I can only assume the worst,” Dolph C. Volker wrote.

However, others also took to the defense of the outback wrangler.

“I’m pretty sure this bloke knows what he is doing, unlike all the people commenting from their office chairs,” John Gills wrote.

Another comment from Matt Skinner, explained how the tape was used for a good reason.

“Tthe tape is used for 2 reasons, to protect the people relocating the croc and as it covers the eyes the croc is not stressed and kept calm. The tail is still a forcible weapons as are the claws. Large salties like this are highly territorial and can become problematic for the locals,” Skinner wrote.

From the comments, the crocodile is believed to be of saltwater variety, the largest living crocodile species in the world, according to National Geographic. Average-size male crocodiles can reach 17 feet and 1,000 pounds, but specimens 23 feet long and weighing 2,200 pounds are also not uncommon.

In a more recent photo Facebook post, Wright can be seen posing again with a taped-up crocodile.

Wright has a show called the “Outback Wrangler” on National Geographic and according to his official website, is an animal expert who has created a career as a wildlife relocator that tracks down, captures, and transports a range of dangerous animals, including crocodiles.

“Matt Wright is a proud ambassador of the Worldwide Veterinary Service and his objective is always based on the preservation of wildlife: to remove and relocate problem animals rather than to kill them,” the website reads.

It is not known if the crocodile in the photo was part of a relocation or just a trophy snap.

Wright’s public Facebook page has over 61,000 followers and posts predominantly photos and videos of him with huge crocodiles and other Australian outback photos.