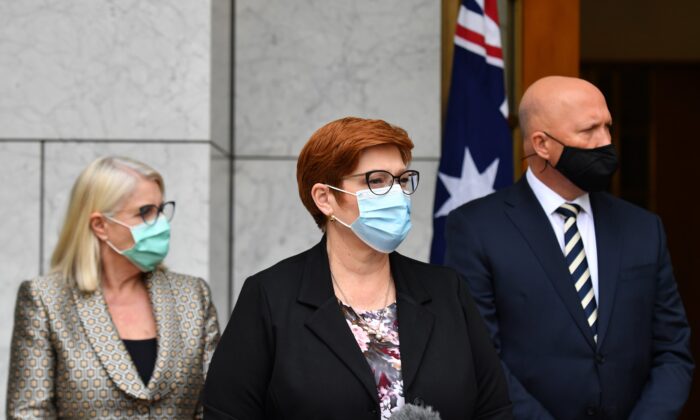 Australia is looking to deepen ties across the Indo-pacific with Foreign Minister Marise Payne and the Minister of Defence Peter Dutton jetting off on a tour of the region for a series of 2+2 meetings with their counterparts from Indonesia, India, South Korea, and the United States.

In a joint press release on Sep. 8, Payne and Dutton said that the tour would enable Australia to reinforce our active engagement in the region and advance Australia’s contribution to peace and stability in the region.

“Australia’s security and economic prosperity is deeply integrated with those of our regional partners in the Indo-Pacific. We share with these key partners a vision for an open, inclusive and resilient region, underpinned by mutual prosperity and stability,” the joint release said.

Payne noted that the most pressing issue for discussion is cooperation for the region’s recovery from COVID-19.

“During our meetings and engagements across the four countries, we will discuss our continuing partnerships to overcome the pandemic, including through the equitable, safe and effective distribution of COVID-19 vaccines and our shared path to global economic recovery,” Payne said.

While Dutton said, the visits were an important opportunity to build on already strong defence partnerships, particularly with the U.S. with the 70th anniversary of the ANZUS alliance.

“I am very much looking forward to meeting with my counterparts face-to-face to build on our already strong relationships and to discuss further our shared interests in keeping our region safe and secure,” Dutton said.

The ministers Payne and Dutton will also be attending the first Australia-United States Ministerial consultations (AUSMIN) with the Biden Administration in Washington on Sept. 16.

They will be joined by counterparts Secretary of State Antony Blinken and Secretary of Defense Lloyd Austin to discuss further cooperation on issues such as economic coercion, defence, climate, supply chains, COVID-19 recovery and more.

A key part of the tour will be Payne and Dutton’s meeting with Indian External Affairs Minister Subrahmanyam Jaishankar and Defence Minister Rajnath Singh on Sept. 11 to discuss issues including economic security, cyber, and supply chains.

The ministers note that the relationship between Australia and India is at a “historic high,” with the prospect of a free trade agreement with India also on the table.

“I have a real sense that we are progressing this time. I think they had the former Prime Minister Tony Abbott here recently as a special envoy dealing with trade. So I think there is a tailwind which we hope to get us past the post,” Jaishankar told the Australian National University’s JG Crawford Oration on Sep. 6.

In the address, Jaishankar also said the Indian Prime Minister had expressed his serious intention to advance the Australia-Indian relationship.

“I’ve heard specifically and regularly from my Prime Minister… do more with Australia, find a way of improving this relationship,” Jaishankar said.

In 2011, Australia begun negotiations with India for a Comprehensive Economic Cooperation Agreement (CECA). Negotiations were suspended in 2015 then re-engaged in 2020 by both Prime Ministers.

The recent push to advance economic relations with other Indo-Pacific nations was triggered by the Chinese Communist Party’s politically motivated economic coercion of Australia, which has forced domestic industries to diversify away from China and towards nations like India.