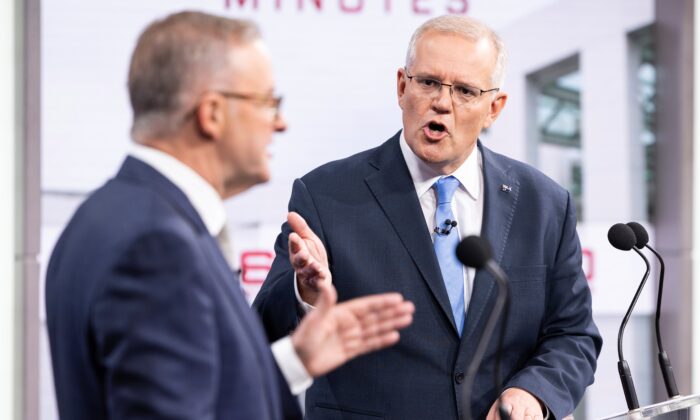 Morrison and Albanese clash on party's failing in dealing with CCP
By Daniel Y. Teng

Australian Prime Minister Scott Morrison and his opposition counterpart Anthony Albanese clashed on the issue of China during the second televised debate between the leaders on May 8 in the lead-up to the federal election.

For both men, the debate was crucial as it came one day before early polling opened on May 9—the official date of the election is May 21.

Compared to the first debate, both leaders were less reserved on some issues and actively argued with the other. Beijing was one such issue, with Morrison and Albanese trading barbs on the other party’s failings around the Chinese Communist Party (CCP).

When questioned on what the Australian government would do if Beijing crossed the “red line” and established a military presence in the region, the prime minister said it would be “unwise” to speculate but emphasised the position of the United States and fellow Pacific nations that were against such a move from the CCP.

“I think Australians understand that Australia would work with partners to ensure that that type of an outcome would be prevented,” he said.

“We know that China is more aggressive and forward-leaning in the region. We know they are trying to increase influence in the region, and this has happened on the government’s watch,” he said.

Morrison retorted, asking why the Labor Party cut defence spending—to 1.56 percent of GDP—when it was last in power.

Albanese responded by saying that when he was last a minister, he was responsible for opening the door to stationing U.S. Marines in Australia’s northern city of Darwin before telling Morrison, “When you were a minister, the Port of Darwin was sold to a company connected with the Chinese Communist Party.”

The prime minister said the federal government at the time had no authority over the sale of assets by territory governments.

The Port of Darwin is currently owned by Chinese-backed firm Landbridge after a controversial 99-year lease offered by the Northern Territory government for $506 million in 2015—the heavily indebted government has since spent the money.

Albanese said, “Xi has changed. Xi has changed the nature of the CCP” and that the relationship was different from the time when the Chinese leader was invited to address the Australian Parliament in 2014 by former Coalition Prime Minister Tony Abbott—Abbott has in recent times changed focus and is now campaigning heavily for greater international engagement with Taiwan.

Then asked, “How many times has Richard Marles met with the Chinese ambassador in Australia?”

The second question caught Albanese by surprise, who eventually responded, calling it an “outrageous slur.”

He then retorted, “How many times has your government invited the leader of the Chinese Communist Party to address the Australian Parliament?”

The comments from Morrison come after recent reports revealed that the deputy Labor leader had advocated for Beijing’s increased presence in the Pacific months before the Solomon Islands security deal came to light.

In a mini-book published in August, Marles wrote that any action Australia took to deny Beijing access to the Pacific on strategic grounds would be a “historic mistake.”

“Australia has no right to expect a set of exclusive relationships with Pacific nations,” he wrote in “Tides that Bind: Australia in the Pacific.”

The incumbent Coalition has run a political campaign targeting the Labor Party on its handling of China relations.

Defence Minister Peter Dutton, on May 5, reiterated earlier comments that he believed Beijing would prefer to see Labor win government.

“There’s no doubt in my mind that the Chinese Communist Party (CCP) would like to see a change of government at the May 21 election. No question at all,” he told reporters at the Defence Debate with his counterpart at the National Press Club in Canberra.

“I think that if you look at all of the language of [shadow foreign affairs spokesperson] Penny Wong—Penny Wong believes that she can go to Beijing on a charm offensive and she could change the direction of China under President Xi,” he added. “President Xi, of course, would be laughing under his breath as he was entertaining his dear friend in Beijing.”