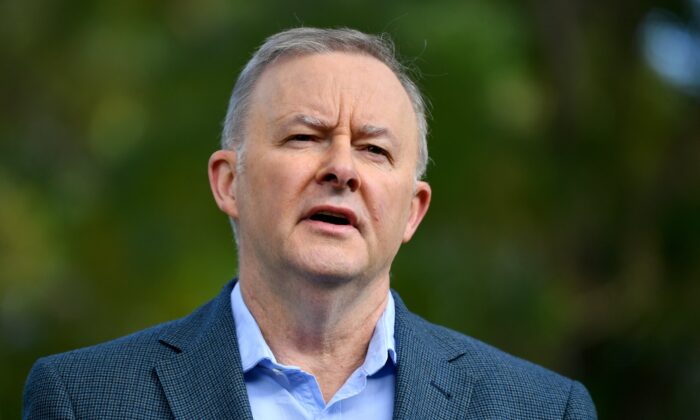 Federal Opposition Leader Anthony Albanese speaks to the media during a press conference in Sydney, Australia on May 29, 2021. (AAP Image/Joel Carrett)
Australia

Federal Labor leader Anthony Albanese has addressed the Queensland ALP state conference in Brisbane, with less than a year to the next election.

Albanese made a pitch for regional and city votes in addressing the Queensland Labor conference.

With an election due in under 12 months, the federal Labor leader has made the Sunshine State a focus of attention.

In 2019, the party won only six seats in Queensland, down two, to the Liberal National Party’s 23.

On Labor’s radar for the next poll are the seats of Longman, Leichhardt, Dickson, Brisbane, Flynn, Bowman, Capricornia, and Dawson.

Albanese has told Labor’s Queensland faithful the Morrison government has “forgotten” their state, with Premier Annastacia Palaszczuk often having to step up to fill the void.

He cited the example of the proposal to build a quarantine facility at Toowomba’s Wellcamp Airport, which the prime minister has argued does not stack up.

“We see a real plan for quarantine dismissed without examination—even though it would make perfect sense to build a dedicated quarantine facility in Queensland. Scott Morrison’s response to the proposal was to pick a fight,” he said on Saturday.

However, the plan for the site near Wellcamp airport does not meet the requirement of proximity to an international airport, nor is it close to existing hotel quarantine venues.

The proposed site, about 150km from Brisbane, is also considered to be too far from a tertiary hospital.

Queensland’s proposal is believed to have been scant on detail compared to an 80-page comprehensive document from Victoria, which signed an MOU with Morrison this week for their own purpose-built facility.

Albanese says the pandemic offers a chance to build back stronger, including boosting public service roles in regional areas, improving health and education services and growing both traditional and new industries.

Having faced a backlash in regional seats at the last election over climate and energy policy, Labor is fine-tuning its message on coal and mining more broadly.

“We believe in ensuring Queensland’s traditional industries have a future,” Albanese said.

“Mining, for example, makes up almost 12 percent of Queensland’s economy.

“Queensland’s huge coal and bauxite reserves are of such high quality, they are—and will remain—highly sought overseas.

“But we also know it’s crucial to back emerging industries. And in many cases, the new industries are being supported by our traditional ones.

“For example, it takes more than 200 tonnes of metallurgical coal to produce one wind turbine.”

Palaszczuk earlier told the conference a regional quarantine centre could be built right now with planes landing next door if only the prime minister was willing to say whether he supported the move or not.

“We are not proposing construction of an international space station,” she said.

“These are reasonably basic structures but they can provide the safety and the certainty our country needs.”

The premier said Queensland was prioritising residential aged care and disability workers at vaccination hubs, with over 3,000 already registered.

There were 18 sites open on Saturday and together with existing hospital clinics, it would mean more places where people aged 40 to 49 can register to get Pfizer jabs.