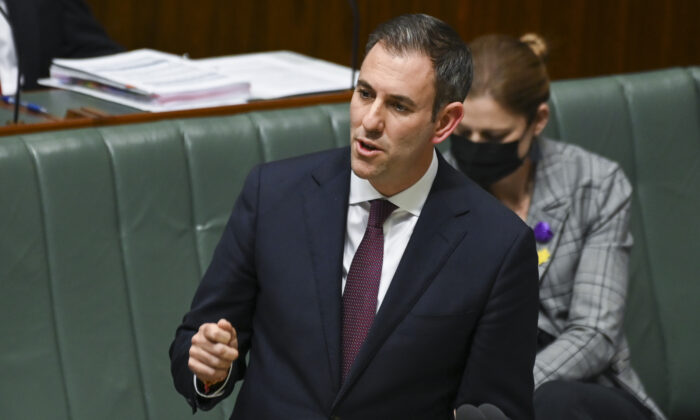 Australian Inflation to Reach 7.75 Percent by the End of the Year

Australian Treasurer Jim Chalmers has warned that inflation in the country is expected to hit 7.75 percent by the end of 2022, around 3.5 percent higher than what he forecasted three months ago.

In his address to the federal parliament, the treasurer said the government had scaled back the economic growth outlook.

“It’s already 6.1 percent through the year to June, and now forecast to peak at 7.75 percent in the December quarter this year,” Chalmers said.

“The current expectation is that it will get worse this year, moderate next year, and normalise the year after.

“We haven’t reached the peak yet, but we can see it from here.”

The treasury department predicts that inflation will drop to 5.5 percent by mid-2023 and 3.5 percent by the end of next year.

And it is anticipated to slip further to 2.75 percent in mid-2024, which is within the Reserve Bank of Australia’s two to three percent target range.

“Inflation will unwind, but not in an instant,” Chalmers said.

“Just as the domestic forces contributing to some of the supply side pressures have been building for the best part of a decade, it will take some time for them to dissipate-but they will.”

At the same time, the treasurer noted that higher interest rates, combined with the global slowdown, would adversely affect Australia’s economic growth.

The growth figures for the 2021-2022 financial year have not been released. However, GDP growth is now expected to reach 3.75 percent during the period.

“A key part of this weaker growth outlook is due to weaker consumption, reflecting higher inflation and higher interest rates,” Chalmers said.

While the treasurer said the revisions of economic figures reflected the challenging economic conditions and declining global growth, he also put the blame on the opposition and allegedly said the previous Morrison government glossed over and buried bad news for political gain.

And despite not focusing on the upcoming October Labor budget in his statement, Chalmers said it would paint a picture of what Australians could expect about the bottom line.

“While the final Budget outcome for 2021‑22 [will be] published soon, [it] is likely to show a dramatically better than expected outcome,” he said.