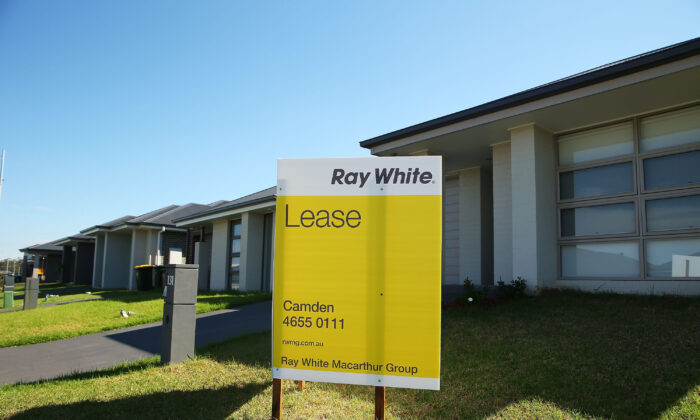 A lease sign is displayed outside a home in Edmondson Park in Sydney, Australia, on April 28, 2016. (Brendon Thorne/Getty Images)
Australia

Annual growth in housing rent in Australia has reached a 14-year high, making life more difficult for renters across the country at a time when interest rates continue to hike.

In addition, rental rates soared by 9.1 percent in capital cities and 10.8 percent in regional areas in the 12 months to June.

Canberra continued to be Australia’s most expensive rental market as the rate of a typical rental dwelling in the capital city hit $690 (US$470) a week, followed by Sydney at $643 per week and Darwin at $565 per week.

At the same time, Melbourne took over Adelaide as Australia’s most affordable rental market, with a median rent of $480 per week.

Regarding units, Australia witnessed a double-digit annual growth in national rental rates for units for the first time, rising ten percent over the past year.

Rental Demand To Grow As Immigrants Come Back

Meanwhile, the vacancy rates for rental dwellings across the country dropped to a record low of 1.2 percent, down from 2.2 percent in June 2021.

Ezzy said the hike in rental demand was not driven by overseas migration but by inadequate supply and shrinking average household sizes.

Additionally, CoreLogic Research Director Tim Lawless said rental demand was likely to trend up as overseas migration recovered. However, he noted that affordability issues might eventually constrain the rate of growth.

The news of the surge in rental rates across the country comes as the Reserve Bank of Australia (RBA) just raised the cash rate for the third time in 2022, taking it to 1.35 percent.

The RBA warned that more rate hikes would come as it was trying to get inflation back to the two to three percent target band.

As things progressed, some economists predicted the cash rate to reach 3.5 percent by next year.

Inflation in Australia is currently at 5.1 percent and is forecast to hit seven percent by the end of the year.

“The board is committed to doing what is necessary to ensure that inflation in Australia returns to target over time,” RBA governor Philip Lowe said in the post-decision statement.

He said it demonstrated a global trend of central banks pushing up interest rates to bring inflationary pressures under control. However, there was a risk of causing a recession.