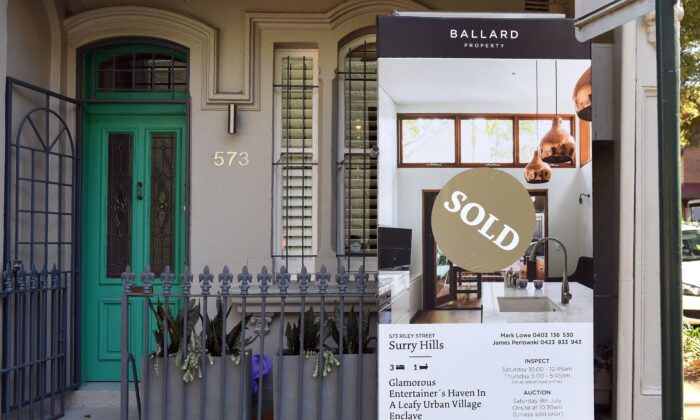 A sold sign on a real estate board advertising residential property in Sydney, Australia, on Aug. 1, 2017. (William West/AFP via Getty Images)
Australia

A new report has shown that the growth of apartment prices across Australia has surpassed houses’ in the June quarter for the first time in three years.

According to the June Quarterly House Price Report by digital property portal Domain, buyers had to spend $618,542 (US$431,893) on average to acquire a unit in Australia’s capital cities, an increase of 0.1 percent in value.

In contrast, the average price of a capital city house dropped 0.9 percent to $1,065,447 compared to the March quarter.

“Affordability constraints, reduced borrowing capacity, and the relative underperformance and perceived value (that) units offer will help steer buyer demand to affordable options, likely to be both units and entry-priced houses,” said Domain chief of research and economics Nicola Powell.

“The changing market dynamics across our capitals are also being driven by a rebalancing of supply and demand, weighing on overall buyer sentiment.”

The fall in house prices during the June quarter comes following a period of significant growth and the Reserve Bank of Australia’s decision to raise the cash rate in May.

Sydney’s median house price dipped 2.7 percent to $1.55 million in the June quarter, while the average price in Melbourne dropped 0.9 percent to $1.07 million.

In contrast, house prices in Brisbane, Adelaide, Perth and Hobart reached new record highs during the same period, with Adelaide reporting the strongest gain, up 3.6 percent to $793,220.

Regarding unit prices, Canberra recorded the highest growth at 4.4 percent, followed by Adelaide at four percent and Darwin at three percent.

Overall, the report showed that the average house price across capital cities in June 2022 was still 10.9 percent higher than a year earlier, while unit prices increased by two percent during the same period.

And compared to the pre-COVID-19 pandemic levels, house prices soared by 34 percent, while unit prices only saw a 10 percent growth.

Despite the growing figures in the June quarter, the Commonwealth Bank of Australia predicted the average price of dwelling units in Australia’s capital cities to drop by six percent in 2022 and eight percent in the following year.

More specifically, the bank forecast that Sydney would see an 11 percent drop in 2022, while Melbourne unit prices would fall by 10 percent this year and another eight percent in 2023.

Additionally, during the June quarter, the Australian Bureau of Statistics reported that the cost of building new dwellings and housing rents rose all over the country.

While construction costs jumped by 5.6 percent, rents rose by 0.7 percent, which was the largest increase since the September 2014 quarter.