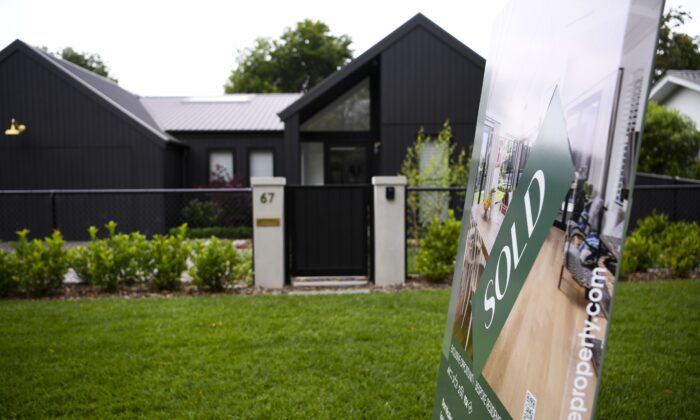 A ‘SOLD’ sign is seen outside a house in Canberra, Australia, on Dec. 8, 2021. (AAP Image/Lukas Coch) NO ARCHIVING
Australia

Rental vacancies in the CBDs of Sydney and Melbourne fell to 2 percent and 3.4 percent, respectively, in response to the return of international arrivals, according to SQM Research (pdf).

Meanwhile, the rental vacancies of other capital cities edged slightly higher but still sit firmly below the 1 percent mark.

The rental market crunch pushed asking rents in capital cities up another 1.2 percent, bringing the 12-month rise to 17.4 percent.

However, some rental markets have also begun to see downturns, with Hobart recording the biggest fall in weekly rents, down 1.8 percent.

“Rents continue to sharply rise in most locations, albeit SQM is now recording falls in rents for Canberra, Hobart, and Darwin, which will at least provide some relief to local tenants,” said Louis Christopher, managing director of SQM Research.

Rental listings remain low, and there is little sign of new supply, which may place further pressure on rents as more overseas visitors arrive in Australia.

The popularity of Airbnb, which provides owners with a potentially more profitable alternative, is also reducing the supply of rental housing, Chris Martin, a senior research fellow at the University of New South Wales, told realestate.com.au.

At the same time, the average value of an Australian home has fallen for the third consecutive month in July, according to property researcher CoreLogic, as the Reserve Bank begins its series of interest rate hikes.

“Although the housing market is only three months into a decline, the national Home Value Index shows that the rate of decline is comparable with the onset of the global financial crisis (GFC) in 2008 and the sharp downswing of the early 1980s,” he said.

“Due to record high levels of debt, indebted households are more sensitive to higher interest rates, as well as the additional downside impact from very high inflation on balance sheets and sentiment,” he said.

Property markets in Perth, Adelaide, and Darwin managed to avoid going into the negative, with growth at a marginal 0.5 percent and below.

Even regional housing markets, which raced ahead during COVID-19 as people pursued a change in lifestyle, have weakened. But overall, regional markets continue to outperform their capital cities.

ANZ Bank is forecasting the market to decline by 15 to 20 percent from the April peak to the end of 2023.

But despite the constant cash rate increases, ANZ Bank senior economist Adelaide Timbrell noted that debt was concentrated in high-income households who are more likely to have large savings buffers.

“That is, the people with the most debt are also the people with the biggest offset balances, which cushion some of the falls in housing prices,” she said. “And that reduces the risk people will have to put their house up for sale due to those rising interest rates.”

CEO of real estate website Domain, Jason Pellegrino, told the ABC that rather than a crash, the downturn was simply a market correction back to normal conditions before it heated up during COVID-19.

“We are moving back towards average market conditions where there is a good balance between demand and supply,” he said.

“Agents, vendors, and buyers are having to meet in the middle, having to have logical and rational discussions rather than a situation that we saw last year where there was a lack of supply and a really strong demand curve, particularly driven by FOMO (fear of missing out).”

As rent continues to see an upswing for the most part and home values fall, homeowners have begun to see their rental yields improve from record lows.

Most rapid yield recoveries occurred in the Sydney and Melbourne unit markets, which were hit particularly hard by COVID-19 restrictions.