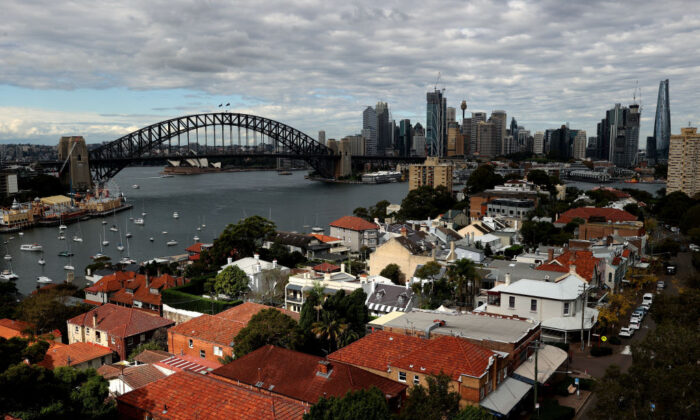 A general view of homes in McMahons Point in Sydney, Australia, on May 5, 2022. (Brendon Thorne/Getty Images)
Australia

Australian house prices are falling, with housing experts expecting to see more significant downward trends in the upcoming months as the Reserve Bank of Australia (RBA) continues to raise the cash rate.

The CoreLogic’s home value index dipped 0.6 percent in June, the second month in a row, following the RBA’s second cash rate hike in 2022. The index for the June quarter was also down by 0.2 percent.

“Considering inflation is likely to remain stubbornly high for some time, and interest rates are expected to rise substantially in response, it’s likely the rate of decline in housing values will continue to gather steam and become more widespread,” CoreLogic research director Tim Lawless said.

The drop in national home values was attributed to the significant monthly decline in house prices in Sydney (down 1.6 percent) and Melbourne (down 1.1 percent)–the two major housing markets in Australia.

However, Adelaide stood out among the capital cities as it witnessed a 1.3 percent rise in home values.

While regional Australia’s house prices still went up during June, the overall growth reduced to a mere 0.1 percent.

It is noteworthy that most housing markets across Australia have recorded sharp falls in home value growth since the RBA started to lift the cash rate in May.

As the cash rate rose to 0.85 percent in June, many Australian banks quickly pushed up their variable and fixed interest rates for mortgage products.

“The May and June Reserve Bank cash rate increases have put an end to an era of home loan interest rates below two percent, something we may never see again,” financial comparison website Canstar’s Steve Mickenbecker said.

In the latest development, the Commonwealth Bank of Australia–the country’s largest bank, suddenly raised its fixed interest rates for homeowners and investors by a massive 1.4 percent on June 30. And other banks are expected to follow suit in the upcoming days.

In May, the CoreLogic home value index recorded the first decline since September 2020 due to house price drops in Sydney, Melbourne and Canberra–Australia’s second most expensive property market.

Nevertheless, the national home value index increased by 11.2 percent in the 12 months to June 30.