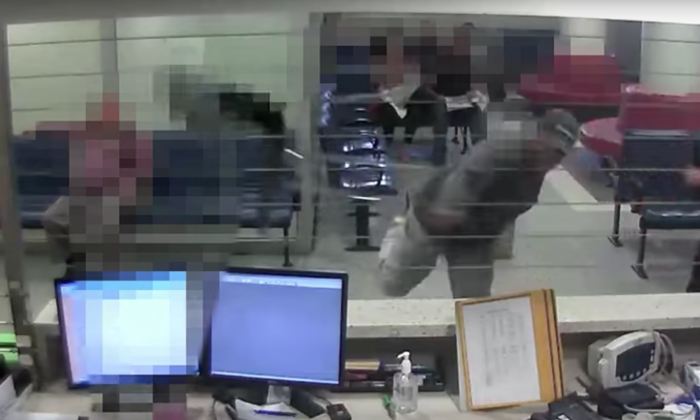 Emergency Department (ED) staff at the Royal Melbourne Hospital have released a confronting video that shows incidents of patients lunging and hurling chairs at staff in a bid to stop the violence and aggression that occurs daily against hospital workers.

Last year, there were almost 7,500 reported incidents of unarmed threats against staff. Of these reports, the most common types of violence and aggression faced by staff in the ED were physical violence, threatening behaviour, and harassment, according to a media release dated Feb. 23.

We’re committed to providing the best possible care for our patients, but to do this we need to ensure the safety of the people who provide that care. Any acts of violence and aggression are unacceptable.

Hospital staff said the purpose of the Help Us, Help You video is to raise awareness about the occupational violence and aggression that occurs in an attempt to make the ED safer for everyone.

“We hope the video, which incorporates examples of what emergency staff experience and CCTV footage of actual incidents, has a positive effect on people in the ED waiting room and watching this on social media,” Emergency Department Nurse Unit Manager Susan Harding said in the media release.

“We want our patients and visitors to understand we are committed to providing the best possible care for them, but to do this we must ensure the absolute safety of the people who provide that care,” she added.

“In healthcare we sometimes tend to think that occupational violence and aggression is ‘just part of the job,'” Harding said.

She said occupational violence and aggression can take “many different forms.”

“It’s the psychological trauma and emotional distress that’s harder to deal with. It’s not only the verbal aggression, it’s the threats that are made. To be told someone is going to wait for you outside of work, they’ll follow you home, they know you have children, that has a terrible effect.”

Watch our fabulous ED NUM, Susan, on Sunrise. You can also watch our video https://t.co/CKisK7iltA https://t.co/zCIyeUsCvw

Harding said many staff at the hospital have been injured due to these incidents.

“We’ve had lots of staff injured, I had a staff member off work for 11 months following an incident where a patient pulled her finger back and tore her tendons,” she told Fairfax.

According to Fairfax, there were 7438 “code grey” incidents, or unarmed threats, in 2017 — which is up 85 percent in just four years and also nine “cold black” situations involving aggressive patients armed with a weapon.

She said there needs to be a “significant mind shift in the workplace and in the community about what is acceptable.”

“We really wanted to change the thinking and help our staff to understand that violence and aggression in their workplace is unacceptable, and that’s not what they come to work for every day,” Harding added.

The video was developed by the ED team at the hospital and was presented at a national conference last week. The hospital said it intends to play the video in the ED waiting room and on social media to remind people what is unacceptable behaviour.

The Royal Melbourne Hospital is not the only hospital facing these horrifying challenges. Last year, a surgeon was killed after a man allegedly spat in his face before fatally punching him in a cowardly attack at a hospital in Box Hill, Victoria. The surgeon had asked the man to stop smoking in a clearly marked non-smoking part of the hospital, reported Herald Sun.