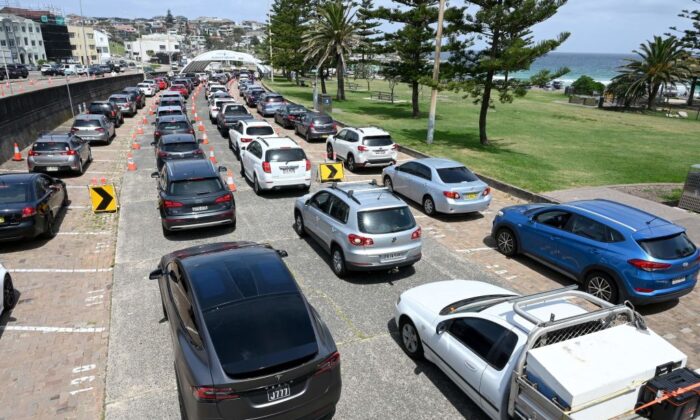 Residents queue up inside their cars for PCR tests at the St Vincent's Bondi Beach COVID-19 drive through testing clinic on December 22, 2021 in Sydney, as the number of COVID-19 cases keeps on the rise across the New South Wales state ahead of the Christmas festivities. (Photo by Mohammad Farooq/AFP via Getty Images)
Australia

A schism has been brewing in Australia’s medical fraternity on how to handle the pandemic best—spilling over into the political realm—with one group pushing for strong measures to smother any potential transmission of COVID-19, and the other calling for society to learn to “live with the virus.”

Dr. Nick Coatsworth, a former chief medical officer during Australia’s initial response to COVID-19, has been a leading voice in calling for a return to normalcy.

“In light of our community success, the evolution of the virus to a milder form and effective new treatments, the time for mandates and whole-of-community restrictions is therefore over. The case for fear of COVID-19 is now restricted largely to the social media platform of Twitter,” he wrote in an op-ed in The Sydney Morning Herald on Jan. 1. 2022.

“Absent the perennial efforts of a small but vocal section of public health academia and a dwindling number of media personalities, our community is ready and can move to a phase of living with COVID-19 as an endemic virus,” he said.

Coatsworth warned the group would continue to push for “disease control above all else,” while trying to capitalise on the upcoming Australian federal election to influence public health policy.

“This will lead to inevitable calls for 2020-style policies in an attempt to damage the incumbent Coalition (government). It is critical that both major parties recognise that the challenges for 2022 and beyond are not related to COVID-19,” he said.

According to emails obtained by the Australian Financial Review, members of OzSage—a lobby group comprised of notable health experts who advocate for strong containment measures against the virus—began mobilising a response to Coatsworth.

“Would OzSAGE please publish an urgent fact check and response to this opinion piece in The Sydney Morning Herald yesterday?” wrote Dr. Kerryn Phelps, president of the Australian Medical Association. “It is having an impact in the community.”

Stephen Robson, former president of the Royal Australian and New Zealand College of Obstetricians and Gynaecologists, said, “Agree with Kerryn 100 percent that a response is required.”

Richard Holden, an economics professor at the University of New South Wales, said he had an op-ed ready to go that he believed would tick “most of the boxes.”

The article, authored along with Steven Hamilton, a visiting fellow at the Tax and Transfer Policy Institute at the Australian National University, was critical of the federal government’s response to COVID-19.

“Policymakers point to current hospitalisations as low and say, ‘everything is going to plan.’ But this ignores the fact hospitalisations lag cases by one to two weeks,” they wrote in the op-ed published on Jan 3.

Holden and Hamilton called the vaccination rollout—where there was not enough supply for a period of time—among the “greatest policy failures in Australian history.”

“Shame on us for imagining they’d learnt their lesson. (Prime Minister Scott) Morrison says he doesn’t want to look in the rear-view mirror, and we can see why.”

Another message chain saw Dr. Phelps warn against sending students back to class for Term 1 in 2022.

“Return to primary school classrooms should be delayed until vaccination levels are optimal, mitigation measures are completed, and the peak of this wave of the #Covid19 passes,” she wrote on Twitter on Jan. 7.

Coatsworth’s response on the social media platform was blunt, “Ignore this individual.”

Late last year, most Australian governments began shifting their policy settings around handling COVID-19 towards “living with the virus”—instead of elimination— focusing on high vaccination rates, testing, and prepping the hospital system for serious cases.

The move has coincided with the onset of the Omicron variant, which has seen a dramatic spike in case numbers, while hospitalisation rates have grown at a steadier pace.