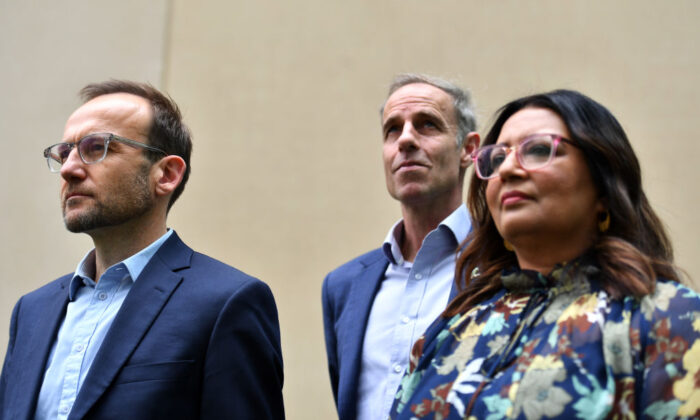 An increase in taxes for billionaires and corporations could be coming if the Australian Greens hold the balance of power after the next federal election.

Under the new plan, support payments will raise the average daily welfare payment from AU$45 (US$33.33) to $88 per day.

Single people over 21 living with no dependents will receive an extra $347 per week (US$257), while age pensioners could receive an additional $122 per week.

The program, which the Greens say has been costed by the Parliamentary Budgetary Office, will cost AU$88.7 billion (US$65.73 billion) over the forward estimates period—the three years beyond the current fiscal year.

“In a wealthy country like ours, no-one should live in poverty,” Bandt said. “By making billionaires and big corporations pay their fair share of tax, we can lift people out of poverty while also lifting wages and boosting our economy.”

“With the cost of living soaring and inflation a looming problem, raising the rate of income support is the urgent economic stimulus that will help lift wages from the bottom up,” he added.

Greens spokesperson for family and community services, Senator Janet Rice, said that something was “deeply broken” when 20 percent of the population was unable to survive on current welfare payments.

“Petrol prices are going up, and food prices are set to rise too. When you’re already barely scraping by every week, it doesn’t take much to push you into dire circumstances,” she said.

The Greens were critical of the main centre-left opposition Labor Party’s “small target” electoral strategy—avoiding major announcements in the hope that voter dissatisfaction can oust the governing Coalition—while saying they were the only “social democratic alternative” for Australians.

Labor Party leader Anthony Albanese has been at pains to distance himself from the more radical, left-wing elements of the political scene to appeal to the mainstream voter, even ruling out any power-sharing arrangement with the Greens if Labor needed the numbers to form a government.

“I won’t be negotiating or doing deals with the Greens after the election,” Albanese told 2GB radio.

“This is just a con for the Greens to talk themselves up,” he said. “This is a complete distraction to make people think the Greens are more important than they are.”

Gigi Foster, an economist at the University of New South Wales, said that while the Greens proposal was appealing to those with big hearts, it oversimplified the main issues at hand.

“In fact, the problems facing our most disadvantaged people are far more complex and deeper than anything that can be solved by throwing more cash at them,” she told The Epoch Times in an email. “Trying to treat their problems with money alone is both insulting and lazy, like taking away the short-term pain of a complex injury by prescribing painkillers without providing hope of a long-term solution.”

Foster said a more comprehensive plan was needed that helped individuals reconnect with society and noted that forcing big corporations to pay for the program was a “dubious” proposal.

“Big corporations have heaps of resources that they regularly tap to hire big-shot advisors to work out how best to hide their income from various national tax authorities around the world, and to lobby MPs not to pass tax laws that will be to their detriment,” she said. “What do the Greens propose that will get around that core problem of entrenched corporate interests effectively calling shots in government and evading taxes?”

Greens leader Band has been confident that increasing dissatisfaction with the two major parties, as well as a splintering vote, could result in a hung Parliament and clear the way for minor parties like the Greens to exert more influence over policy.

In recent months, Bandt has dropped a host of progressive policies including billions in wage subsidies for energy sector workers affected by proposed climate change initiatives, pledging AU$19 billion to make childcare services free for all Australians and halving the defence budget by 2026—despite ongoing military expansion by Beijing in the Indo-Pacific region.