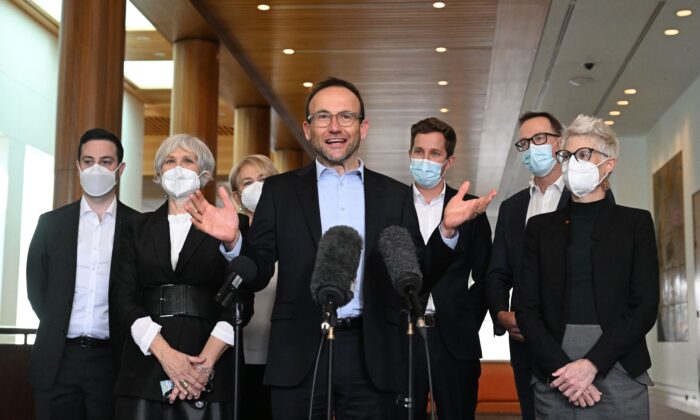 The Australian Greens Party has put the centre-left Australian Labor government on notice, with leader Adam Bandt announcing his party’s intention to push the federal government on all issues it deems important.

Speaking at the National Press Club on Aug. 3, Bandt said the Greens were now in a place of power in the Parliament and would be using their new position to push the federal government to “tackle” progressive measures for Australia.

“The Greens are now in a powerful position,” Bandt said.

“Our working presumption is that Australia will end this term of Parliament with Labor, the country’s centre-right party; the Liberals, a far-right irrelevance; and the Greens, the dominant social democratic party in a country that still has a big, beating, progressive heart.”

Bandt’s comments represent an attempt to shift the longstanding political goalposts to the left, as traditionally, the Australian Labor Party has been viewed as the party representing left-wing values and is heavily aligned with trade union movements in the nation’s political environment.

The Greens have demonstrated their commitment to pushing the ruling Labor party to recognise their voting power in the Australian parliament by stopping the selection of candidates for the vital Parliamentary Joint Committee on Intelligence and Security, which provides oversight of Australia’s national security situation for the government.

Senator David Shoebridges told The New Daily that on the first day of Parliament, the Albanese government was nominating the committee’s 11 members and would have divided the members between only Coalition and Labor MPs.

The Greens, however, stopped the formalisation of these nominations by stating that the government had breached a law requiring it to consult with the crossbench when considering nominations for the composition of Parliament.

“This kind of hyperpartisan two-party nonsense has to end.”

Time To Do Politics Differently

In a post on Twitter, Shoebridge noted that it was “time to do politics differently” and respect how “millions of voters chose a new parliament that’s a lot more than the tired Labor & Liberal duopoly.”

“The shape of this secretive security and intelligence committee is a good first test for this,” he said.

Currently, there has been no announcement about who has been appointed to the committee on its parliamentary website.

Meanwhile, as tensions rise in the Taiwan Strait between China’s ruling communist party and a close Australian ally, the United States and its allies like Taiwan, Bandt has signalled his desire to have oversight of national security, saying that the Greens were concerned that Australia did not have a plan on the table for a de-escalation of tensions in the region.

“We only see a plan on the table for escalation of tensions, and what we will do is push for a de-escalation, knowing how much Australia has got to lose. That has to be the priority,” he said.

He noted that the Greens would seek to prioritise de-escalation in Australia’s foreign policy and defence policy, although he did not state what form this would take.

Read More
Bannon: We Will Be in a Kinetic War with China If We Don’t Win the Information and Economic War

However, prior to the Australian federal election, Western Australian Greens Senator Jordan Steele-John said the party would push for the defence budget to be cut by one percent of GDP by 2026 to ensure that Australia had a light and “highly mobile force” commensurate to the size of the country.

Further, the left-leaning party would close all foreign military bases in Australia and renegotiate the ANZUS alliance with New Zealand and the United States while prioritising “peaceful efforts” in the region to tackle climate change.

Read More
US Plays ‘Essential Role’ in Ensuring Peace and Stability in Asia: Singapore PM
Appeasement of the CCP?

“The Greens are committed to reducing defence spending; this will make $312 billion available over the next decade for essential services our community needs,” Steele-John said in a statement on Oct. 19.

“Our community does not want our future to be at the behest of the United States of America,” he said. “The Australian Greens are committed to re-negotiating the ANZUS alliance, we will not proceed with the AUKUS nuclear-powered submarine deal, and we will close all foreign military bases across Australia.”

However, shadow defence minister and former commander in Australia’s Special Air Service Regiment (SAS) Andrew Hastie said in December, 2021, that the Greens are ignoring the lessons of history, human nature, and the facts about the Chinese Communist Party (CCP).

“We know the strategic environment in the Indo-Pacific is rapidly deteriorating. We know the CCP is engaged in the biggest military peacetime build-up since the 1930s. We know the CCP is flexing its strategic and economic power to dominate smaller countries, and we know that CCP propagandists frequently threaten Australia’s sovereignty and security,” Hastie said.

“Yet, even with this stark reality staring them in the face, the Greens want to weaken Australia precisely at the moment we need to be strong.”

He said that Steele-John’s comments were a reminder of why a Labor-Greens alliance in government is so dangerous.

“We cannot return to 2010, where Labor and the Greens came together to reduce our defence spending to its lowest level since 1938,” he said.