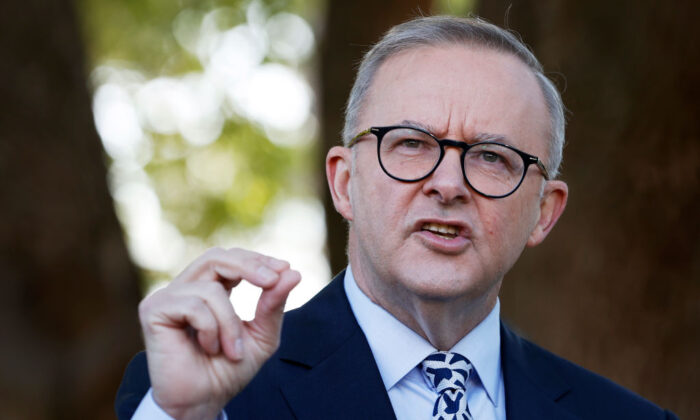 Australian Prime Minister Anthony Albanese speaks to the media at a press conference at Bentley Hospital, which is in the Swan electorate in Perth, Australia on May 16, 2022. (Lisa Maree Williams/Getty Images)
Australia

A biodiversity credits scheme would be the start of a “nationwide restoration” of Australia’s environment, according to the prime minister.

Anthony Albanese said the scheme, announced at an event in regional New South Wales on Friday, would work much like the carbon credits scheme.

Farmers would receive biodiversity certificates or credits for planting vegetation along a hillside to stop erosion and protect the local soil.

It would also reward the creation of connectivity between different habitats, providing corridors for survival for threatened species.

The prime minister told The Daily Telegraph’s Bush Summit that placing a market value on biodiversity would help protect environments.

“As we move toward net zero, we are creating a once-in-a-lifetime opportunity—not just to protect Australia’s natural environment but to kickstart a nationwide restoration,” he told the summit.

“As companies look to invest in carbon offsetting projects like tree planting, we need to make sure there is a path for farmers and the environment to benefit.”

Under the scheme, farmers could receive certificates for planting mixed native species as well as managing existing vegetation.

The Australian Land Conservation Alliance estimates over $1 billion (US$700 million) a year is needed to restore and prevent further landscape degradation.

Companies that have to offset unavoidable environmental impacts could be potential buyers in a biodiversity credits market.

Albanese also used the speech to outline a $75 million fund to deliver mitigation measures for NSW communities devastated by flooding earlier this year.

The money will be delivered by the emergency response fund and would go towards flood impacts and risk management reports, levee assessments and flood-warning infrastructure.

The funding will cover all 62 local government areas affected by the floods in February and March.

“As you grapple with climate change, and the intensifying cycles of flood, fire and drought, you deserve nothing less than a government that has your back,” Mr Albanese said.

“Anyone looking for a true understanding of climate change should look for it here. Farmers see its effects every day. There is no ideological opt-out clause – you live with it.”

The Nap Nap Station water efficiency project would recover 150 megalitres of water for the Murray-Darling Basin Plan, which would be done by upgrading pipes, pump and tanks to prevent water loss.

“Water recovery targets under the Murray-Darling Basin Plan are important, not just for the millions who live and work in the basin, but for all Australians,” Plibersek said.