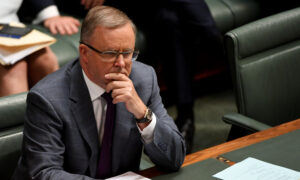 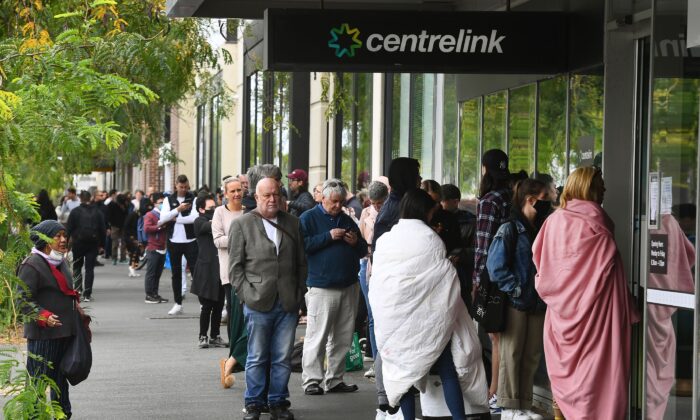 The Australian government is set to introduce a permanent rise in the unemployment payment after the COVID-19 supplement expires at the end of March. (William West/AFP via Getty Images)
Australia

The Australian government is set to introduce a permanent rise in the JobSeeker payment rate by $50 a fortnight or $3.57 a day. This will be the first real increase to the unemployment payment in Australia since 1994.

It is also the largest increase since 1986 and is expected to cost the country $9 billion dollars over the next four years.

The base rate of the Australian employment payment, formally known as Newstart, was set at $565 a fortnight—or $40-a-day—before the introduction of the COVID-19 supplement in March 2020.

Speaking at a press conference in Canberra on Tuesday, Prime Minister Scott Morrison said the changes to the JobSeeker rate were a result of Australia moving to a new stage in our recovery from the pandemic and were tied to the vaccination roll-out.

“We are moving from short-term emergency measures to long-term arrangements that people can rely on should they find themselves out of work,” he said.

The proposal, which was discussed during a Liberal Party meeting on Tuesday, will be fast-tracked into legislation before the end of March.

The scheme will also now have stricter eligibility rules and stronger penalties. Job seekers will be expected to apply for 20 jobs a month by July—the same as prior to the pandemic—and employers will now be able to dob in someone who refuses to accept an offer of work, resulting in a possible loss of payments to that individual.

Minister for Employment Senator Michaelia Cash said that the increase means that 1.95 million Australians who are on working-age payments will receive an increase of $50 per fortnight as of April 1.

Challenge of Fairness and Incentive Balance

Not everyone is happy with the increase.

The Australian Council of Social Service (ACOSS)—who have been calling for a permanent increase of at least $25 a day ($375 per fortnight)—said the increase was a betrayal of millions of people.

“This is a heartless betrayal of millions of people with the least, including hundreds of thousands of children, single parents, people with disability, older people, students, people dealing with illness and injury, and others relying on income support,” said ACOSS CEO Cassandra Goldie on Tuesday.

“Today, the Government has turned its back on those with the least, plunging people further into poverty. It’s a cruel decision that shows a complete lack of humanity and empathy. It comes as devastating news for so many and will have serious consequences for people’s lives, including homelessness and crushing debt,” she said.

Agreeing with Goldie was Greens leader Adam Bandt who said the increase was an insult.

“This decision will keep people going hungry. It will keep unemployed people facing homelessness,” he said.

Opposition leader Anthony Albanese said Labor would not block the legislation. “It’s important there be a permanent increase and that be done as a matter of urgency, just to provide certainty for people as well,” he said.

Morrison brushed aside the criticism though noting that the welfare payment should be weighed against the burden it places on taxpayers.

“I have no doubt that whatever rate you set the payment, there will always be suggestions by some that it should be more. There’ll be some who will suggest it should be less,” Morrison said.

“That’s why a government has to exercise judgement in getting that balance right. But not just in the setting of the payment but also the conditions that sit around the provisions of that payment and that are seeking to support people not to have to rely on that payment and to be able to get them back into work.”

Most economists believe that increasing the nation’s unemployment payments during the pandemic provided a much-needed boost to the economy as a dollar that goes to the unemployed is much more likely to be spent than a dollar to others.

A Deloitte Access Economics report commissioned by The Australian Council of Social Service last September projected that the total removal of the COVID-19 supplement to JobSeeker would cost the Australian economy $31.3 billion in gross domestic product and around 145,000 full-time jobs across 2020-21 and 2021-22.

The organisation’s analysis estimated a permanent $80-a-fortnight increase in JobSeeker would cost the budget about $2.7 billion in 2020-2021, and a cumulative $7.5 million over the three-year period to 2023-2024. The extra cash would flow to more than 1.4 million unemployed people receiving the supplement.

The latest ABS figure shows that January 2021 has recorded the fourth consecutive monthly rise in employment, with the unemployment rate dropping to 6.4 percent from 6.6 percent in last December, adding further positive signs that Australia’s economy is bouncing back quickly from COVID-19.